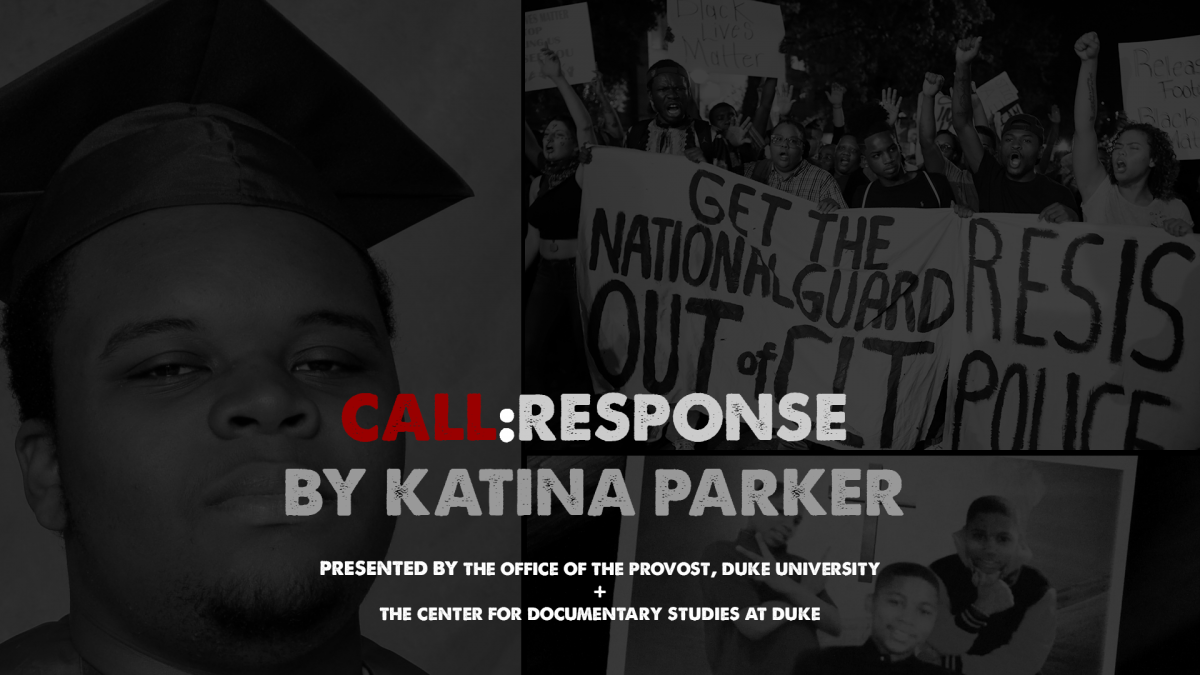 Southern writer Clyde Edgerton once wrote that it’s almost impossible “to write about race in America without bombast, outrage, or satire.” How else, he asked, can one “confront a system of structural inequality that has savagely circumscribed lives for generations?” This is true for filmmakers as well. But with her two-part film, CALL:RESPONSE, Katina Parker courageously engaged her audience to face this reality head on, unflinchingly. The Center for Documentary Studies, along with the Duke University Office of the Provost, commissioned the film for “Policing Color: Black, Brown, and Blue”—the Provost Forum on Race, Community, and the Pursuit of Justice held earlier this year in response to the September 2016 killing of Keith Lamont Scott in Charlotte.

Parker’s film raises central questions for documentary and activism in an age where mobile digital video is immediately shareable. In the last decade—since the camera phone came into common usage in 2007—tens of thousands of videos of Black people and other people of color brutalized and killed by law enforcement have circulated on social media. These citizen videos have moved documentary media to the center of politics of equal treatment under U.S. law, one of the central promises of the American covenant.

CALL:RESPONSE has been through a number of edits; the first iteration was screened as the centerpiece of the “Visualizing the Impact of Racial Violence” panel at the Provost Forum. Parker grounded the work in the ethic with which the planning committee approached the event: We wanted to make the program relevant, affirming, and healing for those who are the most marginalized in the Duke community. Part one of the video, CALL, provoked anger, sadness, and frustration for some viewers. “Why are you assaulting me with these visual reminders of the murders of Black people?” “What is the point of me being re-traumatized?” “How can this help, where is the hope for how we move forward?” Others, equally unsettled, responded with fury toward “the system,” or “the police,” or “everyone who doesn’t care about this.” Still other reactions included acknowledgment, like that from the father of Michael Brown, Jr. Michael Brown, Sr., thanked Parker for not pulling back from his truth, and for addressing the underlying realities. How else to prevent the next young person from being killed?, he asked.

Released in commemoration of Michael Brown, on the day he was killed three years ago, we at CDS are proud to present Katina Parker’s CALL:RESPONSE, her statement, and her list of resources as a creative, powerful experiment in community-based documentary that holds itself accountable to the most vulnerable and marginalized among us. Your feedback is welcome.

Scroll down for Katina Parker's statement on this two-part film, CALL: RESPONSE.

At the time I was commissioned to create a video for Duke University’s Provost Forum in association with the Center for Documentary Studies, I’d been in and out of Ferguson, Missouri, for three years and had covered the pushback against racist policing in multiple cities, including LA and Baltimore. Like many of the protesters and embedded media, I’d seen the absolute worst in police. We’ve been tear-gassed, called niggers and nigger lovers, beaten with batons, shot at, held at gunpoint, and railroaded on trumped-up charges. There have been three separate instances where Ferguson protesters were found shot and burned to death in their cars, with no serious inquiries being made by the authorities. Many of us had to change our phone numbers and some had to move out-of-state due to death threats from the KKK and White supremacist groups.

The request for the video was that I demonstrate the impact on our collective consciousness now that we have so much access to cell phone and surveillance video of the police killing unarmed and sometimes unwell Black and Brown people.

It proved to be one of my most heart-wrenching commitments.

CALL:RESPONSE is a two-part video: CALL is a stitching together of civilian-captured cell phone and surveillance videos documenting police aggression against Black people. And RESPONSE combines footage from my personal archive that embodies our collectively brilliant, joyful, and sorrowful clap back against a system that daily undermines and extinguishes the self-esteem and livelihood of our beloveds, especially our children.

For CALL I spent weeks with each extended version of the dash cam, cell phone, and surveillance videos playing on repeat, as I witnessed and re-witnessed the murders of Sam Dubose, Tamir Rice, Sandra Bland, Kajieme Powell, Alton Sterling, Keith Lamont Scott, Walter Scott, and Philando Castile. It was a sorrowful litany in a series of senseless killings, one after the other, year after year, layered and often impenetrable, reaching back centuries, since Africans were brought to America against our will and indigenous people were practically eradicated from our homelands, due to the same colonialist ideologies that still inform systems of policing. I culled through each frame to create something that resembles the connected internal dialogue and resulting trauma that informs how and why we as Black people interact with police in the ways we do.

Overall, as evidenced by the videos, police seemed to disregard the trauma that they inflicted. Sometimes they lied to escape punishment (see Sandra Bland and Sam DuBose).

Rarely are police fired, punished, or otherwise held accountable. Due to the strength of police unions, most get paid leave while they’re under investigation. In some instances, White supremacist groups crowdfund thousands of dollars on behalf of the officers in question.

Admittedly, CALL is difficult to watch. But I refuse to look the other way while people suffer unnecessary violence. These videos exist as "proof" of atrocious acts of police aggression that have regularly played out in communities of color, sometimes daily, for centuries. I invite you to bear witness, to grieve, to take action. RESPONSE is my love note to the many hundreds of thousands of conscientious objectors who’ve put their lives on the line in order to protect the lives of those who are targeted by state violence. Please take the time to watch both pieces from start to finish.

It's important that we complicate the narrative and move away from colonialist frameworks of "discovery," as if we are now "discovering" police brutality after hundreds of years of well-documented and widely accessible testimonies that already exist within the archive in the form of lynching postcards, newspaper articles, court testimony, recorded oral histories, and Works Progress Administration documentation. Blatantly advertised and socially promoted bigotry is not new in America. However, growing widespread social unrest in response to racial profiling by the state is a new phenomenon, resulting from decades of integration.

White consciousness has evolved. Increasingly, White youth are willing to challenge the outdated ideologies of their families. Communities of color are also engaged in an aggressive liberatory process to rid their lives of White supremacy’s debilitating imprint, which means being unapologetically vocal and proactive about eliminating the daily violence that we experience. Once you couple these factors with the ability for everyday citizens to document social injustices through the use of easy-to-use smartphone technologies and to distribute their images to millions through social media, we have the potential for significant, sustainable social change. That time is now.

As Black people, we have never needed visual proof of our own lived experiences. However, race-based state violence has become harder to dismiss by White people. What the documentation offers is confirmation to our White counterparts that our testimonies are true—and that we are human.

I'm speaking to a type of crazy-making social conditioning that African diasporic, LatinX, Asian, Jewish, and Indigenous people have endured for centuries. In order to be validated, we are challenged by Whites to present a type of proof that White people deem to be acceptable, in the same way that we have been required to present slave papers, passes, and birth certificates in order to verify our social credibility.

The questions must be asked: Why weren't we believed in the first place? And what does that disbelief alter in each of us—the unbelieved and the unbeliever?

Even when we present visual evidence of police brutality, often from multiple sources and angles, many Whites discredit us through the use of traditional racist tropes that mischaracterize Black people as superhuman, unpredictable, innately criminal, and therefore deserving of the ultimate punishment—death.

In terms of cultural ideologies and differences, something deep is at work here. Traditionally, as African and Indigenous people, many of us value "the word" and "the drum" more deeply than we value any other format—and for the longest time it's all that we had. The fact that White culture demands something other than our most sacred and valid offerings is an enduring act of violence.

Historically, in America, we were forbidden to learn to read and write. We were also forbidden to speak our native tongues. Mainstreamed industry jobs like filmmaking, photography, and TV production were nearly impossible to access due to White supremacy. We circulated newspapers and documented within our communities, but were mostly prevented from doing so in White communities. Radio and theater and church were accessible—but note—they are word-based. It is no accident that the tools of proof approved of and required by dominant culture were inaccessible to us up until people of color were found to be a viable source of cash influx for the mobile device market.

In America, cash changes everything—even at the expense of exposing White supremacy.

My favorite questions, the ones I fall asleep to at night: Can we turn White supremacy on its head now that we have these tools so firmly in our grip? And what will we do to protect social media and citizen journalism as vital access roads to freedom?

Katina Parker is a filmmaker, photographer, journalist, and writer in Durham, North Carolina, who creates films and shoots photographs for Samsung, Al Jazeera, the Wall Street Journal, the New York Post, Fusion, and Huffington Post. Parker is a 2016–17 recipient of the North Carolina Arts Council Artist Fellowship and a former instructor at the Center for Documentary Studies.