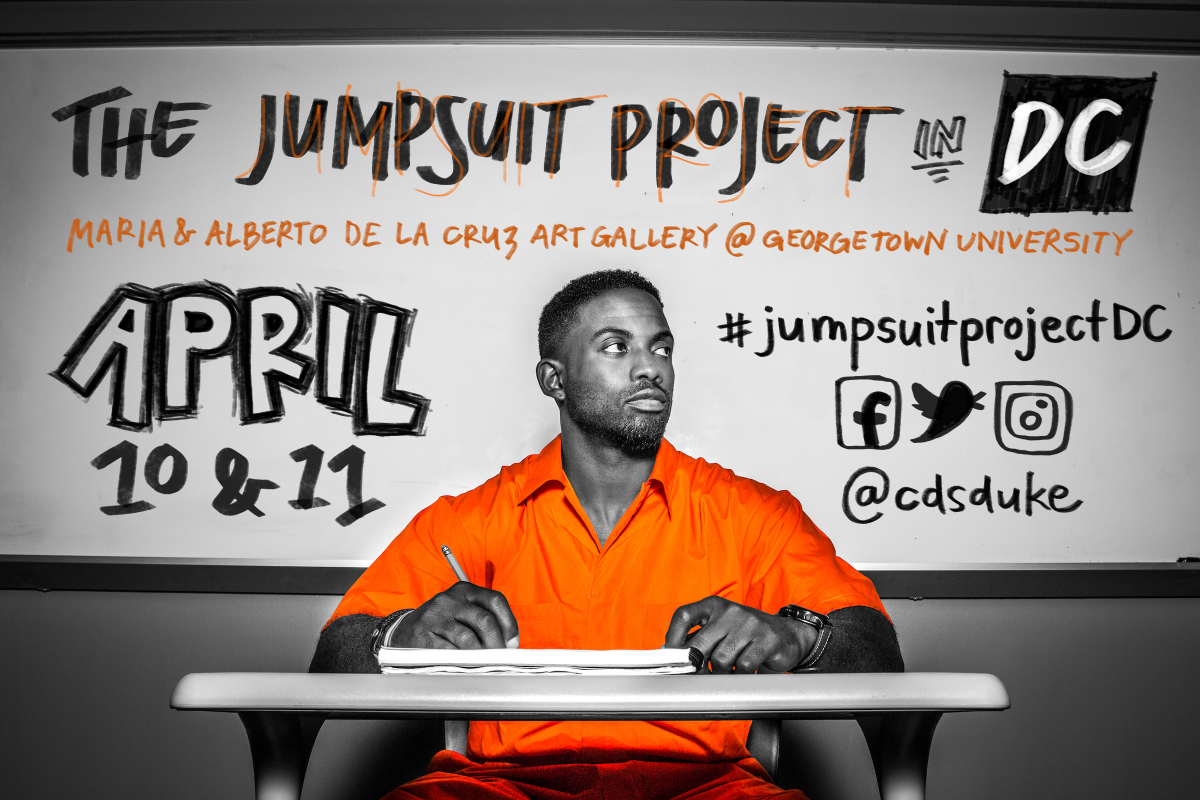 On April 10 and 11 , 2019, in Washington, D.C., the Center for Documentary Studies Post-MFA Fellow in the Documentary Arts, Sherrill Roland, will perform his acclaimed interactive art piece, The Jumpsuit Project, at events presented by Georgetown University’s Maria & Alberto de la Cruz Art Gallery and the school’s Prisons and Justice Initiative. There will be performance events at the gallery open to the public, as well as a six-mile walk, part of which is open to the public. Scroll down for schedule.

Roland created The Jumpsuit Project after a wrongful conviction resulted in a ten-month prison term in D.C.’s Central Detention Facility just as he was beginning his last year of grad school. Exonerated of all charges in 2015, Roland returned to the University of North Carolina at Greensboro and started developing the project to raise awareness around issues related to incarceration, interacting with the public while wearing an orange jumpsuit every day until graduation.

“I found liberation in sharing my story,” Roland says. “My performances challenge those who encounter the orange jumpsuit to address their own prejudices toward people who are or have been incarcerated.”

At the events in D.C., Roland and the de la Cruz Art Gallery “aim to provide a safe space for the public to question, process, and challenge the crisis of mass incarceration,” said the gallery in their newsletter, which went on to quote Al Miner, founding director/chief curator of Georgetown University Art Galleries: “We are incredibly proud to be collaborating with Sherrill Roland, a talented young artist who possesses the ability to create much needed change, on the first D.C. iteration of The Jumpsuit Project. Sherrill’s performance is the perfect fit for our new Galleries program, which highlights the link between contemporary art and social justice through engaging exhibitions and public programs.”

Wednesday, April 10
Maria & Alberto de la Cruz Art Gallery, Georgetown University, 10:30 a.m.–3:30 p.m.: Wearing his orange jumpsuit, Roland will occupy a space the size of his D.C. prison cell and invite the public to listen and converse with him as he shares personal stories to heighten awareness and challenge assumptions about incarcerated people.

Thursday, April 11
Morning until early afternoon, outside locations: In a new element of the performance created for this occasion, The Jumpsuit Walk, Roland will walk six miles in his orange jumpsuit from D.C.’s Central Detention Facility, where he was incarcerated, to the de la Cruz Art Gallery. Roland invites the public to join him at 9 a.m. for the middle leg of the walk along the National Mall, beginning at the Capitol Reflecting Pool and ending at the Lincoln Memorial Reflecting Pool.

7 p.m., de la Cruz Art Gallery: Immediately following the performance, Roland will have a public dialogue with Dr. Marc Morjé Howard, Professor of Government and Law at Georgetown University and the founding Director of the Prisons and Justice Initiative (PJI).

Sherrill Roland is an Asheville, North Carolina, native who received his BFA in design and MFA in studio art from the University of North Carolina at Greensboro. The interdisciplinary artist is the 2018–19 Post-MFA Fellow in the Documentary Arts at the Center for Documentary Studies, Duke University. Roland has shared The Jumpsuit Project around the country with speaking engagements at the University of Michigan Law School, Princeton University, and other educational institutions, and performances at LACE: Los Angeles, the Studio Museum of Harlem, and MOCA Cleveland.