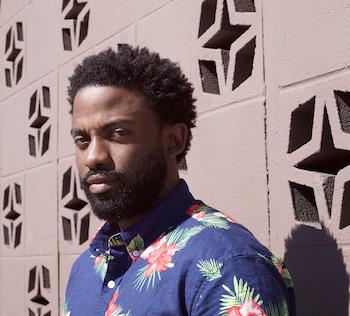 Artist Sherrill Roland has been awarded the Center for Documentary Studies’ (CDS) 2018–19 Post-MFA Fellowship in the Documentary Arts, and will be in residence at CDS for ten months, beginning September 1, 2018. The fellowship is part of CDS's Documentary Diversity Project, a three-year pilot program whose goal is to build pathways for more people of color to engage with the documentary arts, to support their achievements, and to promote their work. Other participants in the project include a cohort of Emerging Documentary Artists. The pilot is made possible, in part, by a grant from the William R. Kenan, Jr. Charitable Trust.

Roland is a North Carolina native—born in Asheville and currently living in Raleigh—who received a BFA in design and MFA in studio art from the University of North Carolina–Greensboro. As he describes his work, Roland “creates art that challenges ideas around controversial social and political constructs, and generates a safe space to process, question, and share.” He is the founder of the acclaimed Jumpsuit Project, intended to raise awareness around issues related to mass incarceration. The work grew out of personal history, from the ten months he spent in state prison on a wrongful conviction just as he had started his last year of grad school in 2013. Based on new evidence, Roland was exonerated of all charges in 2015. Back in school, he wanted to provoke conversation around issues related to incarceration, including prejudice toward those incarcerated—for his MFA thesis project, Roland wore an orange jumpsuit every day and documented his interactions until his graduation in spring 2017. He has shared the project around the country via speaking engagements at the University of Michigan Law School, Princeton University, and other educational institutions, and as a performance piece, most recently at LACE: Los Angeles, the Studio Museum of Harlem, and ARTSpace Raleigh.

As CDS’s Post-MFA Fellow in the Documentary Arts, a generous stipend will give Roland the space and time to further develop his portfolio. He plans to expand on the work begun with the Jumpsuit Project, hoping to continue the conversation around mass incarceration’s social costs and push for more institutional awareness and change, particularly around the impact of systemic racism on the over-representation of black and brown people in the prison population. “I believe these issues affect everyone and should be received both voluntarily (art institution) and non-voluntarily (on the street),” Roland says. Along with presenting the work in museums, galleries, and project spaces, his goal is to place visual materials from the project outside of those institutional spaces as well as in newspapers and on billboards and announcement boards. He plans to have a social media platform attached to the project.