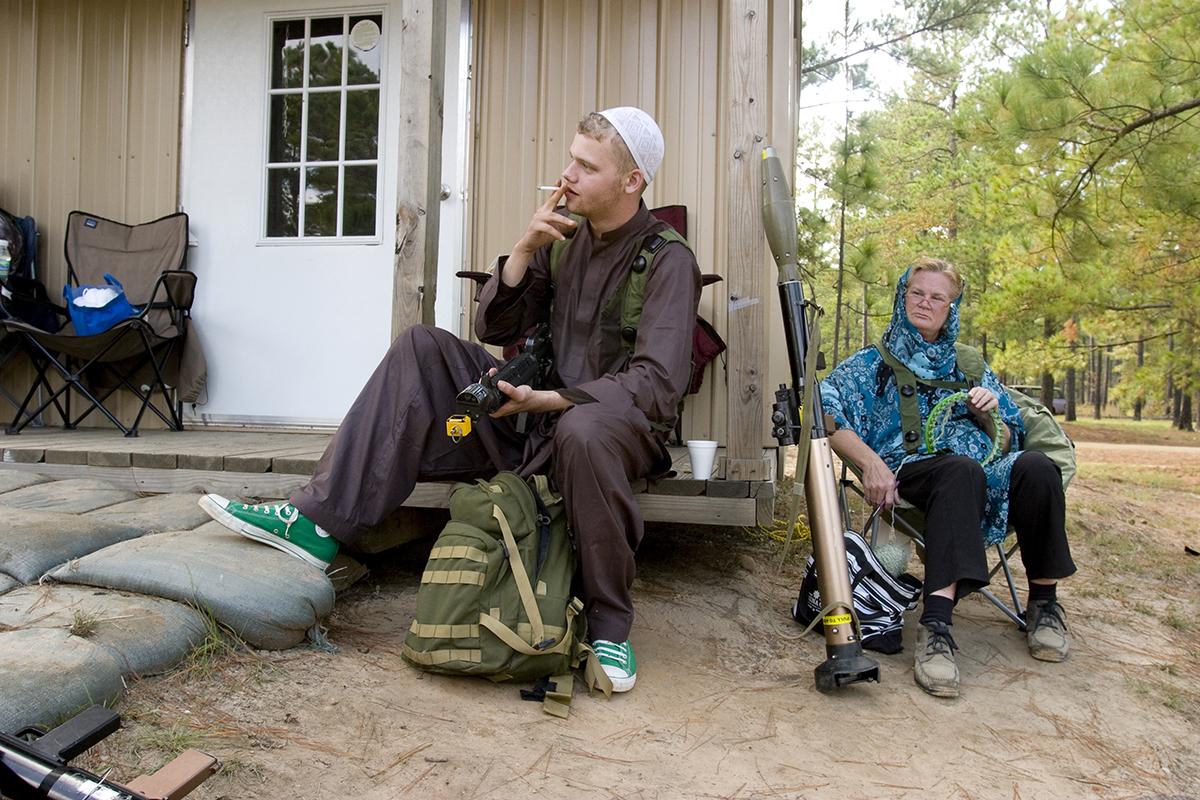 Look for the CDS Book of Theater of War in 2019

The Center for Documentary Studies (CDS) is delighted to announce that director of undergraduate education and lecturing fellow Christopher Sims has received a 2017 Graham Foundation Grant to support the publication of a book of photographs, Theater of War: The Pretend Villages of Iraq and Afghanistan.

The Graham Foundation makes their grants to diverse projects and programs that advance new scholarship, fuel creative experimentation and critical dialogue, and expand opportunities for public engagement with architecture and its role in contemporary society.

Since its founding in 1989, the Center for Documentary Studies has been committed to publishing works of creative exploration by writers and photographers who convey new ways of seeing and understanding human experience in all its diversity—books that tell stories, challenge our assumptions, awaken our social conscience, and connect life, learning, and art. Chris Sims’s body of work for Theater of War exemplifies this mission. This long-term project relies on extended research and fieldwork and is told artfully and imaginatively; it is work based in a commitment to motivate the thinking and reflection of others.

Since 2001, Chris has been engaged in investigating, with an insistent curiosity, American military ventures from the perspective of the home front. The photographs for Theater of War were made within fictitious villages on the training grounds of U.S. Army bases, places largely unknown to most Americans. The villages are situated in the deep forests of North Carolina and Louisiana, and in a great expanse of desert near Death Valley in California. Each base features clusters of villages spread out over thousands of acres, in a pretend country known by a different name at each base: Talatha, Braggistan, or “Iraq.”

The villages serve as a strange and poignant way station for people heading off to war and for those who have fled it. U.S. soldiers interact with pretend villagers who are often recent immigrants from Iraq and Afghanistan, who have now found work in America playing a version of the lives they left behind. The remainder of the village population is drawn from the local communities near the Army bases, including spouses of active-duty soldiers as well as military veterans of America’s wars in Vietnam and Korea.

Sometimes Chris is a role player himself. As he describes it, “Sometimes I visit the villages with access provided by the military’s public affairs office; other times I am . . . playing the character of a war photographer for the ‘International News Network.’ Here, backstage in the war on terrorism, I see insurgents planting a bomb in a Red Crescent ambulance; American soldiers negotiating with a reluctant mayor; a suicide bomber detonating herself outside of a mosque; and villagers erupting in an anti-American riot. The designers and inhabitants of these worlds take great pride in the scope and fidelity of their wars-in-miniature. By day’s end, hundreds of soldiers and civilians lay dead—the electronic sensors on their special halters indicating whether friendly fire, an improvised explosive device, or a sniper’s bullet has killed them.”

Chris’s work is not simply intelligent and ingeniously executed, it could not be more relevant. He has earned a surprising vantage on a rapidly changing global theater we are all struggling to comprehend. With Theater of War he gives us unusual access to places that we haven’t been while giving us glimpses of where we may be headed. This incisive, original, and multi-dimensional story is one that needs to be shared, and preserved.

A CDS Book of Theater of War is forthcoming in 2019.

Christopher Sims has an undergraduate degree in history from Duke University, a master's degree in visual communication from the University of North Carolina at Chapel Hill, and an MFA in studio art from the Maryland Institute College of Art. He is the undergraduate education director and a lecturing fellow at the Center for Documentary Studies at Duke University. His exhibitions include shows at the Houston Center for Photography, the Light Factory, the Southeastern Center for Contemporary Art, and the Halsey Institute of Contemporary Art. He was selected as the recipient of the Baum Award for Emerging American Photographers in 2010, named one of the “New Superstars of Southern Art” by the Oxford American in 2012, and was awarded the Arte Laguna Prize for Photographic Art in 2015.