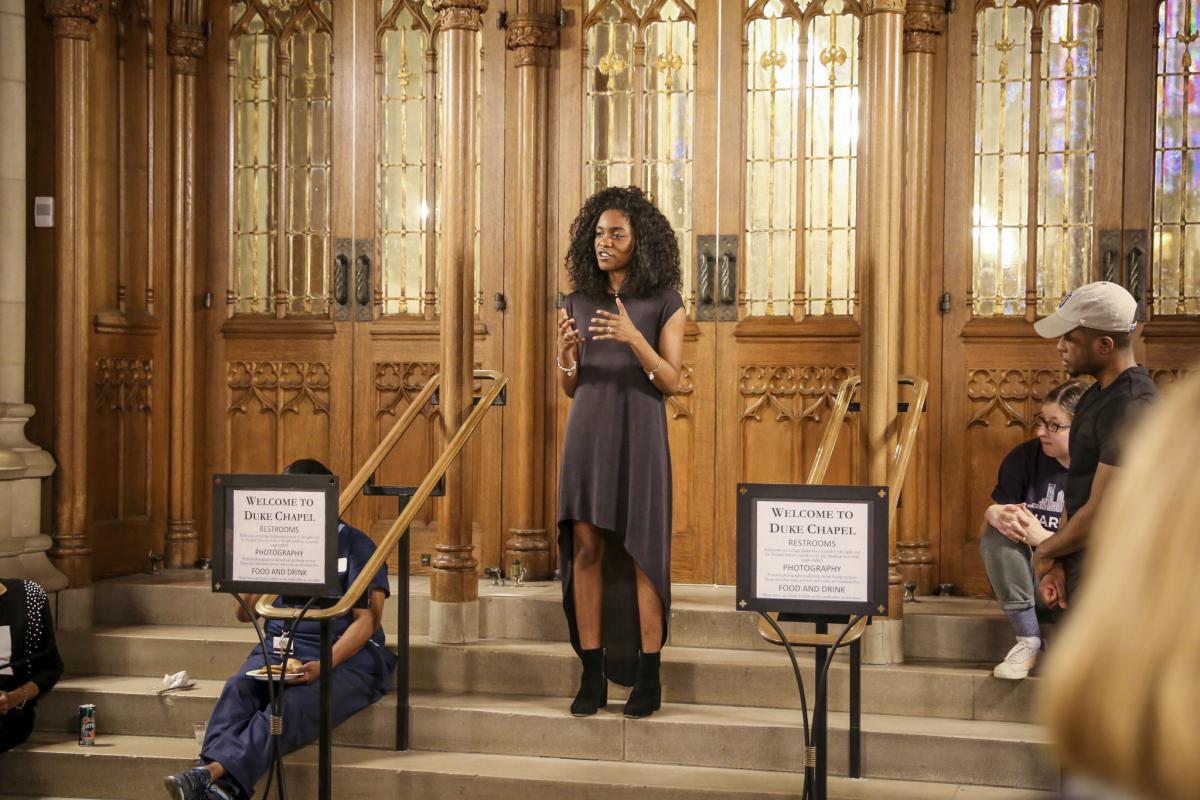 Image: Evan Bell at Duke Chapel for her Faith in Color exhibition

The Julia Harper Day Award was created by the Center for Documentary Studies (CDS) in 1992 in memory of the young woman who was CDS’s first staff member, a writer and photographer of real accomplishment. This $500 award goes to a graduating Duke University senior who has demonstrated excellence in documentary studies and contributed significantly to CDS programs. The 2018 Julia Harper Day Award goes to Columbia, Maryland, native Evan Nicole Bell.

Her Program II advisor and CDS professor, Alex Harris, writes of Evan:
“Photographs are by definition about the surface of things. Evan Bell manages to hint at qualities of the interior lives of people she photographs. I've worked with Evan as her instructor, in a color-photo fieldwork seminar, an independent study, and as her advisor for her self-designed major. It is clear that Evan has at least two attributes that are essential for any documentary photographer: a fine eye and a way with people. Though it might be gratifying for me to take some credit for Evan’s work over these last few years at Duke, those are gifts and cannot be taught.

Evan is a social activist photographer who is making pictures that are focused on contemporary African American society, portraits that are at once beautiful and full of mystery. When she showed me her faith-based photographs for Faith in Color, her exhibition at the Duke Chapel, it struck me that in her choice and placement of photographs, Evan makes a visible connection between moments of grace and spirituality inside churches, temples, and mosques with those that occur outside of religious services in the daily lives of people she photographs. As a photographer and person, Evan shows a maturity beyond her years.”

After graduation, Evan plans to catalog the thousands of photos she made over the past three years to create an interactive mixed-media online exhibit. By combining still imagery with an overlaid audio narrative, she will add depth to the preexisting series by providing her unique perspective as the documentarian who completed the project, adding analysis of Durham’s rich black history and the socioeconomic factors that affect Durham’s black citizens today, thereby galvanizing viewers to engage in the community’s cultural and economic landscape.

Find out more about Evan Bell and her work on her website.