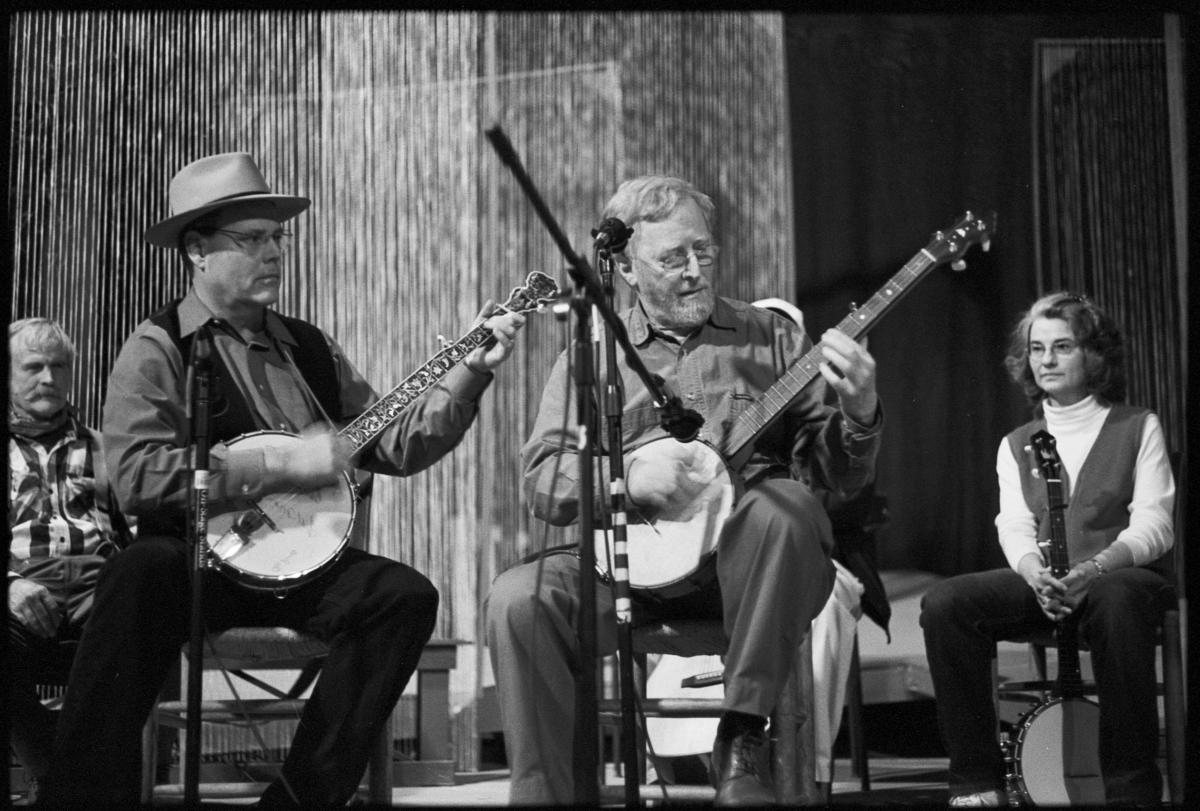 When John Cohen died on September 16 at his home in Putnam Valley, New York, we lost a part of our collective soundtrack, our visual chronicle of the new and the old, the avant-garde and the old time. A singular documentary artist whose energy and aspiration never seemed to wane, John Cohen was a friend of many of us throughout the Center for Documentary Studies (CDS), Duke, UNC, and North Carolina. He joined us at Duke in 2004 for a semester of teaching as the Lehman Brady Joint Chair Professor of Documentary Studies and American Studies, mentoring undergraduate and graduate students at Duke and UNC with his distinctive vision infused by his deep experience as a musician, photographer, filmmaker, and visual artist. In 2015, John was an honoree at CDS’s 25th Anniversary Forum and Celebration.

There is no simple way to summarize John’s 86 years; I will leave it to future scholars and critics to choose their angle in taking stock of all he did and how he did it, what he made, and what he left us. A founding member of the New Lost City Ramblers, he and his fellow bandmates influenced generations of musicians through their recordings, fieldwork, and collaborations with other folk musicians. Some have suggested that the Grateful Dead’s song “Uncle John’s Band” pays tribute to John and Rambler bandmates. John was everywhere, it seems, and his influence resonated from his careful listening and looking. He took the still production photographs for Robert Frank’s Pull My Daisy film in 1959, and soon after went to eastern Kentucky in search of banjo players, finding Roscoe Holcomb and what John later called his “high lonesome sound.” Of Holcomb John wrote, “Once I became aware that his singing shook me to the core, I tried to find out why.” Soon after returning from Kentucky, he photographed a young Bob Dylan in Greenwich Village, and around the same time, a declining Woody Guthrie. Whether doing documentary work in the Peruvian Andes or the streets of New Haven or among the Beat Generation and folk music revivalists in New York, Cohen brought the same visionary acumen, embracing moments with a spontaneous documentary clarity.

His book There Is No Eye: John Cohen Photographs (2001, powerhouse Books; introduction by Greil Marcus) begins with images close to home and moves outward. Cohen’s camera accompanied him on his inexhaustible search to understand folk music and creativity across geographies. His sleight-of-hand title for a landmark collection of photographs—“There is no eye”—signals his deep understanding that his images are as personal as they are ethnographic. “I wanted to make a visual statement,” he wrote in the book, “encompassing both documentary and subjective ideas, to find a way to integrate feeling with seeing. I was often torn between a need to document (describe) what was in front of me and the desire to follow intuitive visual impulses. . . . I walked the line between these ideas all my life.”

The line Cohen walked—blending documentary fieldwork with his personal artistic aspirations—has left a last resonance with musicians, photographers, filmmakers, curators, writers, and documentary artists. John’s work has always revealed to us the power of documentary art to be both about others while also deeply about ourselves. In the context of the long shadow of certain mythologies in documentary photography, ideas that suggest a distant objectivity replicated through recognizable photographic styles, Cohen’s assertion of “no eye” might come as a surprise. In his introduction to Cohen’s book, Greil Marcus seemed to struggle with the message: “Here there is no point of view. There is something else; I don’t know what to call it, so I won’t try.”

I’ve always believed that John’s point of view—hard to declare in words, but felt and seen in everything he did—is singularly his own, richer and more layered than most. His embrace of the personal, subjective motivations of his ideas and interests while also demonstrating his work to be about something much larger, converged to give his photographs, films, and music a lasting resonance. His vision was never simply about him or another, about this place or that place, but more likely about both and all, and in what’s found between.

Scott L. Matthews, in his seminal 2018 book Capturing the South: Imagining America’s Most Documented Region (part of the CDS/UNC Press Documentary Arts and Culture series), dedicates an entire chapter to interpreting the documentary and artistic record John created through his fieldwork in Kentucky. Matthews quotes from a 1970s Cohen article in Southern Exposure, “Since my first drive through eastern Kentucky I have viewed traditional culture as a hidden spiritual resource, and my only aim throughout has been to share it with others. . .” John’s openness to Matthews’ scholarly weighing and measuring of his career is yet another generous act of sharing.

In recent years, he played and traveled with the Downhill Strugglers, the talented Brooklyn-based string band of Eli Smith, Walker Shepherd, and Jackson Lynch. In a lyrical poetic inversion, Cohen became the knowing, experienced old timer—the Roscoe Holcomb, let’s say—and the younger Strugglers sat in the chairs that John Cohen once occupied in reverence to the music that came before. His commitment to the next generation also propelled him to donate his Steenbeck editing table, 16mm Arriflex 16 S camera, and a host of assorted film equipment to our MFA in Experimental and Documentary Arts program for use by our students.

John signed my copy of The High & Lonesome Sound: The Legacy of Roscoe Holcomb (2012, Steidl) soon after it came out. I recently pulled it down to take a fresh look. In his delicate handwriting he printed in broken lines:

The inscription moves me now in ways it never did when he was still with us. I like that John saw me as his “southern brother”; but for me he was always the revered northern uncle, the knowing elder, me looking up to him in an attempt to fully consume his expansive work and take a little of its poetic energy for the road. He was—and always will be—that Uncle who Jerry Garcia and Robert Hunter pointed to in the song they wrote and released on Workingman’s Dead in 1970:

Come hear Uncle John's Band by the riverside
Got some things to talk about, here beside the rising tide

Keep looking, keep listening; hear all he sang and showed. John Cohen’s sounds—the high and the lonesome, the light and the dark—will play on forever.