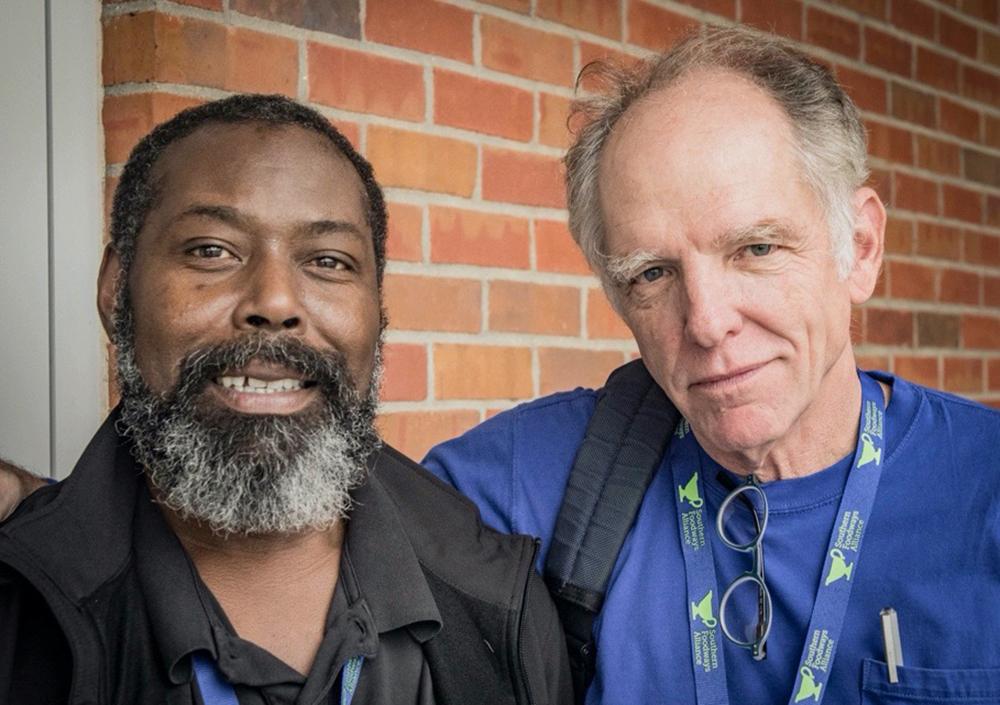 Randall Kenan, former Lehman Brady Visiting Joint Chair Professor of Documentary and American Studies at Duke and UNC as well as a member of the Board of Directors of the Center for Documentary Studies at Duke since 2005, died suddenly and unexpectedly in late August. Randall and I were close friends for many years, and it’s a true struggle to find the appropriate combination of words to express all he meant to so many of us, to the place and time we inhabit, to the world of fiction and nonfiction, to the ongoing work of telling what needs to be told.

I first met Randall when he was the Grisham Writer-in-Residence at the University of Mississippi during the 1997-98 academic year. It was my last year teaching in Oxford before I moved to North Carolina to direct the Center for Documentary Studies. We ran into each other at the City Grocery, probably on a Thursday or Friday in those days, when a group of us frequented that special watering hole. I was ordering a drink at the bar when the writer Larry Brown introduced me to Randall. What I remember most about our conversation was Randall’s generous, bright, and handsome aura, the feeling that I was talking to someone whose distinctive spirit was infused with a palpable and knowing energy while simultaneously revealing a quiet humility. There was an unmistakable gravitas to Randall as he stood with us sipping on his drink, talking books, writing, teaching, Mississippi, and his home state of North Carolina. If Randall could hear me say this now, he would be embarrassed, would offer up his characteristic chuckling laugh, a sincere and doubting glance, all to say, “Now stop it, you know better.” What I would give to experience his reaction.

Anybody reading what Randall’s friends have said about him since his passing have learned that he knew more about more than any of us. He had read more of the classics and of the recently- published, of science fiction and art criticism than anyone I have ever known. He knew endless details about television and music, could talk in-depth about comic books, their history and symbolism. Get him on the subject of food and his wide-ranging interest and knowledge entertained and enlightened for hours. But for all Randall knew, he understood even more. He carried with him an old-world insight into the human condition, our failures and potentials, our dark and light, our humor and our tragedy. His deep understanding and empathy are what made him such a singular artistic voice and such a powerfully good fellow traveler on any and all journeys. His abiding friendship, mere presence, always left you wanting more.

Everyone wanted a piece of Randall Kenan, and why wouldn’t they? His originality, humor, good nature, and uncommon wisdom made him everyone’s choice for their board, panel, conference, guest editor, foreword writer, manuscript reviewer, keynote speaker, thesis or dissertation advisor, teacher, and on and on. He was invited and expected to attend everything, perhaps a compliment but in the end also an impossible and tiresome burden. He addressed some of this in an essay published in 2019 in Southern Cultures: “At elegant gatherings and august meetings, I often scan the room and wonder aloud why I am, as people like myself are often given to ask, the Only Negro in the Room, or ONR, as Ta-Nehisi Coates and Natasha Trethewey have been known to note,” he wrote. “I am not foreign to these gatherings,” he continued in that essay, “in fact, I usually have a front row seat. This makes sense as I have never run away from my ur-southern rural roots or my African American heritage; in fact, for better or worse, I’ve run toward it, even when running away from it. I’ve gladly embraced it, even when it pricked me with thorns. I chose to think about and study these matters as if they matter.”

That Randall never ran away from his place, his family, his culture, may well have been what set the table for his rich artistic vision. That he focused, always, on the matters that matter was one of his fundamental and lasting lessons to us all. He made it all look so easy, so natural—the eloquence, the artistic voice spoken and written, the kindness—yet to know Randall was also to know how overextended he was, how much his generous spirit might ultimately cost him.

In 2002, I invited Randall to come to the Center for Documentary Studies to be our Lehman Brady professor. I was interested in further developing our curriculum in documentary writing, and no one interested me more than Randall Kenan. He had recently published Walking on Water: Black American Lives at the Turn of the Twenty-First Century, a giant of a book based on six years of travel and listening to the stories, feelings, aspirations, and concerns of Black Americans.  Randall saw leaving Memphis, where he was on the faculty at the University of Memphis, to teach at Duke as coming home, a one-year teaching position that would bring him closer to family and friends. For years Randall gave me exaggerated credit for bringing him back to North Carolina. He signed my copy of his book The Fire This Time, “To Tom—the Dude who single-handedly brought me back to NC.” Nothing is done “single-handedly” on a university campus, but I have to say I always have appreciated having a hand in getting Randall back here, to where he wanted to be. And who wouldn’t accept, even cherish, being called “the Dude” by Randall Kenan? After a year at Duke, he was hired to teach creative writing at UNC–Chapel Hill, his alma mater.

For all of Randall’s national and international reputation as a defining inspiration in Black and gay literature, he was very much marked by his early life in Duplin County, North Carolina. So much of his fictional Tims Creek comes from his family life in Chinquapin, North Carolina, from the influence of his grandparents and aunts. In his essay “Scuppernongs and Beef Fat: Some Things about the Women Who Raised Me” (in Mothers and Strangers: Essays on Motherhood from the New South), he reflected on the three women in Duplin County who nurtured him in his early years, and what they gave him: “And so, as always, there are three things: a love of food, an instinct toward compassion, a love of words and story. To me these all work together, bind each other, make wonderful sense, make life life.” He goes on to write, “The three things these women gave me: love of food, love for my fellow human, love of reading.”

Randall’s ecumenical interests were such that he naturally  influenced students and other artists widely, in multiple directions. Countless writers, visual artists, and scholars bear witness to his influence on queer literature, on the understanding of James Baldwin, on Black life and literature in America. Food writing would not be same without Randall’s involvement in the Southern Foodways Alliance and his example of talking seriously, critically, and artfully about food. He taught and mentored legions of writers whose work bears his fingerprints throughout, and those influences will only continue.

Randall gave the graduation address at Duke’s Master of Fine Arts in Experimental and Documentary Arts ceremony at the Nasher Museum of Art in 2015. In his talk, “There’s a Hellhound on Your Trail: How to See Like Gordon Parks,” which we published in a chapbook the following year, Randall guided us through the blues, Depression-era photography, contemporary journalism, the intersection of fiction and nonfiction, writers from Melville to Robert Johnson to W. E. B. Du Bois, all the while coming back to Gordon Parks and the range of his works across photography, film, and writing. Looking out at the graduates, their families, and all the rest in attendance, Randall quietly proclaimed, “The truth is not sentimental. The truth is dangerous. The truth will get you in trouble.” At one point he settled in to talk about native North Carolinian Joseph Mitchell’s Joe Gould’s Secret and Robert Penn Warren’s All the King’s Men, and like only Randall Kenan could do, revealed how these two artists hitch fact with imagination, place with individual life, how these writers ultimately “flirt and subvert stereotype.” At the end of this remarkable intellectual journey that was of all things a commencement speech, Randall looked directly at the MFA graduates, who were all sitting in the front row, and asked them a series of fundamental and serious questions:

“So here is the question, my friends: Will you be willing to tell the truth? To sing the blues? To work to create in your brothers and sisters that feeling of eye-witness, to let us all know what it was like to be there? Will you, like James Agee and Walker Evans, go into the wilds of the world and fearlessly capture and stick your fingers into the eyes of the Henry Luce’s of the world? Will you like Gordon Parks go into that same corporate entity and that same Southern wild, and bring back witness that will teach us how to see and feel? Will you be capable of singing the blues even when you are sitting on a pile of gold? Do you have what it takes to become your own blues heroes?

Will you have the guts to stare down that hell hound and say, ‘Git! Git on away from me! I got work to do.’”

Randall’s new collection of short stories, If I Had Two Wings, was published just weeks before he died.  Like his first two works of fiction—the novel A Visitation of Spirits and the story collection Let the Dead Bury Their Dead—these new stories return the reader to Kenan’s fictional landscape of Tims Creek.  Writing for the New York Times in a 1992 review of Let the Dead Bury Their Dead, Howard Frank Mosher said of Tims Creek that Randall Kenan “has created, in a single obscure hamlet, a deeply and peculiarly American community, as memorable as any I have encountered in recent fiction.” Weeks after his death his new story collection was longlisted for the National Book Award, such deserving and appropriate praise, bittersweet only in timing.

My wife, Jill, and I got together with Randall as often as possible. Whenever we invited him to the house, be it for a small dinner or to cook a whole hog or goat, I would get a similar email reply if he was free and able to join us. “As Louis B. Mayer once said, ‘Please include me in.’” I laugh every time I read it, even now. Who other than Randall Kenan quotes Louis B. Mayer? I wasn’t even sure who he was.  And now I review all those emails from Randall stored in my inbox—the serious and the funny—and want to say again and again, worry not, we will forever include you in. Randall Kenan wrote himself into the perpetual bookshelves, the everlasting library of American literature, “included in” in all ways, to be read, re-read, and remembered. Ever and always.

Randall Kenan’s books include the novel A Visitation of Spirits (1989), the nonfiction works Walking on Water: Black American Lives at the Turn of the Twenty-First Century (1999) and The Fire This Time (2007), and the short story collections Let the Dead Bury Their Dead (1992) and If I Had Two Wings (2020).