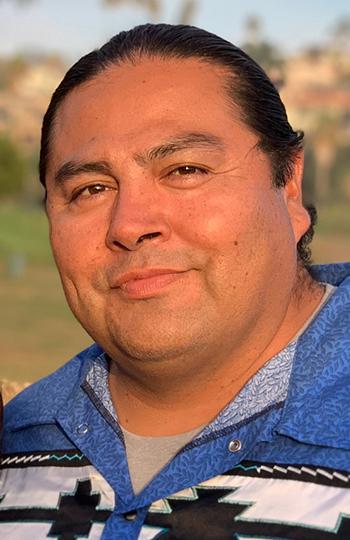 Note: Myron Dewey (1972–2021) was Lehman Brady Visiting Joint Chair Professor at Duke University and the University of North Carolina–Chapel Hill in Spring 2019; he was based at Duke’s Center for Documentary Studies. In “Remembering Myron Dewey,” CDS undergraduate education director Chris Sims remarks, “Myron posed questions of his students and colleagues that asked us to re-think fundamental assumptions about our relationships to land, education, and to creation itself.”

Dewey is most well-known for his pioneering use of drone camera footage as a tool of resistance in the Dakota Access Pipeline (DAPL) protests on the Standing Rock Sioux Reservation in 2016, and for the documentary film Awake: A Dream from Standing Rock (2017), which he co-directed with Josh Fox and James Spione.

Myron Dewey is a professor, historical trauma trainer, youth media trainer, and award-winning filmmaker, journalist, and digital storyteller. He is the founder of Digital Smoke Signals, a social media production company that aims to give a platform to indigenous voices in media. Dewey’s drone footage of the Standing Rock movement marks him as one of the most important journalistic voices working on environmental and indigenous issues today. Through both Digital Smoke Signals and his own media work, Dewey seeks to bridge the digital divide throughout Indian Country and to indigenize media with core indigenous cultural values, work that he has pursued for more than twenty years.