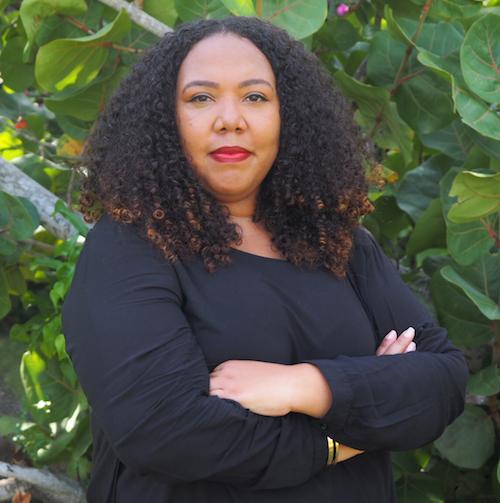 The Center for Documentary Studies (CDS) has been fortunate to have artist/documentarian Tamika Galanis in its orbit for some time now—as an MFA in Experimental and Documentary Arts student (2014–16) and graduate assistant at CDS during her last year in the program, as the CDS exhibitions assistant in 2016–17, and as its inaugural Post-MFA Fellow in the Documentary Arts in 2017–18. The fellowship is part of CDS’s Documentary Diversity Project, a three-year pilot that builds pathways for more people of color to become nonfiction filmmakers, audio producers, photographers, writers, and new media artists.

With the end of June 2018 marking the end of her ten-month fellowship, Galanis recently reflected on her time at CDS and on Hacking the Narrative, her ongoing project around the representation and history of her native Bahamas—work she began as an MFA student, expanded on during her time at CDS and will continue at the John W. Kluge Center in the Library of Congress as the Jon B. Lovelace Fellow for the Study of the Alan Lomax Collection, and will share in part during her fall 2018 solo exhibition at CDS, One Hurricane Season. The following interview was edited and condensed from a longer conversation between Galanis and CDS communications director Liz Phillips.

Describe Hacking the Narrative and how One Hurricane Season, the piece of the project that you developed during your fellowship here, fits in.
My film [her MFA thesis project, When the Lionfish Came, which screened at the International Film Festival Rotterdam and will screen at the BlackStar Film Festival], the traditional documentary photographs, called The Constituency, and the 3D-printed sculptures, The Human-Coral Hybrids—all of these are under the umbrella of the ongoing project, and One Hurricane Season falls under that umbrella, too. The aim of all of the work is, during this age of climate change, to capture a much more nuanced Bahamian experience than the outward-facing story of “island paradise” that the rest of the world gets.

How did One Hurricane Season evolve?
Last year after I finished my work here with Courtney [Reid-Eaton, CDS exhibitions director] and before I found out about the CDS fellowship, I went home. When I’m in Nassau I stay with my grandmother, and at first she was still driving, going to church four times a week, gardening, still had her wits about her. I got there in June, and it did not register till then that it was hurricane season. Later on, watching images of Hurricanes Irma and Maria tear through the rest of the Caribbean, I’m thinking we’re not going to make it out of this. The other thing happening was that we realized something was changing with my grandmother, that she had dementia. It was terribly hard watching this person I’d known my entire life turn into someone else.

When I got back, that helped me frame the work on One Hurricane Season, which likens my personal experience with my grandmother to what happened to the countries throughout the Caribbean in that hurricane season. What does it mean to wake up in a place, to wake up in a body, that’s different than it’s been for its complete existence? It’s a very personal foray into a global story. In this exhibit I’m going to do that through archival family videos and photos and natural materials. The post-MFA fellowship was a gift of time and space that has shaped me and shaped this work.

How are you planning on using your eight-month fellowship at the Library of Congress to build on the overall project, Hacking the Narrative?
So that time will be about repatriating [the Bahamian-based materials from the Alan Lomax Collection] back to the Bahamas and making work in the vein of Lomax around folk culture in the places he visited. In 1935, Lomax went to Cat Island and Andros [Island] and he recorded everything—folk tales, folk songs, jumping dances, sermons. And in the collection there also all these photographs of people from Andros and Cat Island that I’m absolutely taken with. Most of them are musicians and their families, but I want to know who they are, if there’s any way to backtrack and give them names and expand the archive a little bit more. In terms of repatriating the Lomax materials, I’m going to liaise with the National Art Gallery of the Bahamas and the University of the Bahamas to figure out where this work should live in digital form to make it more accessible for Bahamians.

And is there a next known step for you after the Lovelace Fellowship or will you see how the spirit moves you?
The spirit’s already moved me. I’m going home. I don’t know what that looks like—applications have gone out, I’m looking for funding—but I’ve come to the conclusion that the kind of work that I want to do is not going to happen with me popping in and out of home with a camera every few months. The amount of ground that I want to cover and the kind of access that I'm asking for, I need to be in a place to build relationships.

I don’t believe it’s a question of if, I believe it’s a question of when—when the Bahamas meets the same fate as the Pacific SIDS [small-island developing states] like the Marshalls and the Solomons that have already begun to disappear—somebody’s going to be looking for us, for everyday Bahamians. Even if it’s us to remember us, right? Our experience is not going to be told by the colonial archive and it’s not going to be told by contemporary ad agencies because we have been erased from that story. We are not there. And I don’t want that experience to speak for me.

So you conceive of your work on that level, that it aspires to de-erase and tell and preserve Bahamian culture and history?
Absolutely. And I don't venture to think that I can do any of this by myself, right? My hope for this work is that eventually I will be able to have the tools and the resources for the communities to be able to document themselves. Because I'm just one person, one vantage point, one point of view. But if I can teach people to look at their communities and their experiences in the way that I feel the documentary lens provides us, then I think that's going to be a much richer experience. And that is the work that I'm going to do for the rest of my life.

What will you miss the most, do you think, about being here?
When I came to Durham to the MFA, I owned a camera that I taught myself how to use, but I was very reluctant to call myself an artist coming into a place where I thought everybody knew everything about art and documentary. I had no idea CDS would be such an integral part of discovering my documentary self, and I didn’t expect to connect with people who feel like family. I’m really, really going to miss the people. I say I've grown up CDS. In the past four years, I have grown up CDS, and I'm really going to miss being here.

Read more about Tamika Galanis’s work and the Documentary Diversity Project in a recent story in Duke Today, “A Different View of the Bahamas.”