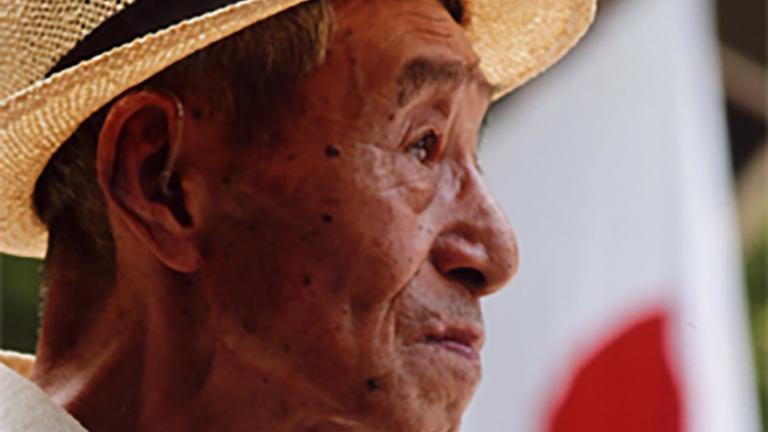 Director Kaoru Ikeya has been selected to receive the 2007 Center for Documentary Studies Filmmaker Award for his powerful and compelling film The Ants, which explores an eighty-year-old veteran's quest to document the story of Japanese soldiers who were ordered to fight in China after World War II. The film raises complicated questions of how history gets written, the politics of remembrance, and the nature of war.

In the Japanese army, "ant soldiers" were those fighting men, many of them drafted, who performed the dirtiest jobs of war. When Japan surrendered in August 1945, some 2,600 soldiers were ordered to stay in China's Shanxi province and fight with the nationalist army during the Chinese civil war. Waichi Okumura was one of them. He ultimately became a prisoner of war and didn't return home to Japan until 1954. Upon his return, he learned that he was ineligible for a military pension as the Japanese government claimed that at the end of the war the troops in China had been discharged but had opted to fight as volunteers—"mercenaries," as Mr. Okumura puts it—in the nationalist army.

Along with a number of other veterans who fought in Shanxi, Okumura mounts a legal battle against the government to prove that the soldiers were under military orders, and thereby have their pensions restored. Waichi Okumura's search for the orders takes him to China, where he and Keoru Ikeya cover more than 2,000 miles looking for evidence and interviewing eyewitnesses. There, Mr. Okumura also begins to understand his own story, his part in the much larger sweep of events, as well as to come to terms with the realities of war.

The journey forces Mr. Okumura to face the atrocities that were committed by Imperial Army soldiers—some of them veterans who have joined him in the lawsuit against the government. Like other recruits, he was ordered to stab a Chinese villager with a bayonet during a training exercise because, as he puts it, the officer wanted "to test his courage." In the film, he revisits the site of his first killing and prays for the dead.

"We were turned into so-called killing machines," he recounts. "I want to reveal how the military deprived us of our rational nature."

Okumura becomes committed to creating a record on film of what is remembered—and what is forgotten. He asks a Chinese woman to tell him the story of how she was raped by Japanese soldiers, and he recalls how he kept lookout while fellow soldiers committed rape. (When asked whether he, too, had raped women, he responds, "no," but he emphasizes that the question is not "who did or who didn't, but a problem of the whole military.") At Tokyo's Yasukuni Shrine, where Japan's war dead are enshrined and celebrated, Mr. Okumura questions a group of teenagers about why they are worshipping the soldiers in the shrine, about whether they know the story of soldiers who fought in China. He chides them for not knowing their history, for not thinking more deeply about what it means to worship at the shrine. Later in the film, again at Yasukuni Shrine (on August 15, the day the war in the Pacific ended), Okumura confronts a famous veteran, Hirro Ononda, who fought on in the Phillipines for thirty-one years after the end of the war, unaware that Japan had surrendered, asking him, "Are you glorifying our war of aggression?" Okumura says, "Those who fought in the war of aggression and died are not gods."

The ceremonies at Yakusuni have become increasingly controversial as people in Japan debate whether Japan's pacifist postwar constitution should be changed and and whether political leaders should take part in celebrations at the shrine. Keoru Ikeya observes that they talk about these issues "without discussing what the Imperial Japanese Army was all about in the war." The film shows that "the war is not over yet. Once you go to battle, the war won't let you go until you die."

Between 2001, when Okumura and the other veterans (Okumura being the youngest) sued the government, and 2006 when the case was presented before Japan's Supreme Court, only five of the plaintiffs were still alive. In the end, testimony from survivors on both sides as well as written documents revealed that a secret agreement must have existed between Japanese General Sumita and nationalist General Yan Xishan. Xishan asked Sumita to leave Japanese troops in China to help fight Mao, and it appears, promised to protect the Japanese commander, who was accused of war crimes. Despite this evidence, the Japanese Supreme Court rejected the veterans' final appeal.

On August 6, 1945, the A-bomb dropped in Hiroshima City. My father was exposed to the bomb at the arsenal where he worked, just 1.4 km away from the epicenter. He was with his colleagues. Three of them were killed on the spot. My father was injured but survived. My parents kept this a secret from me until I was eighteen years old. They feared that I might have bad effects from radiation exposure, and were probably concerned about the psychological impact on me. I became a healthy grown-up. They felt easy and finally told me about it. When I heard this, I was shocked—not because I was a child of an A-bomb victim, but because I hadn't known about it. I was really angry at my father and blamed him for hiding this from me. Whatever had happened to me, I wanted to know the truth. I felt I had right to know. When I met Okumura, who is a few years younger than my father, I was charmed by his toughness, guts, honesty, and persistence to look for the truth. Then, I decided to film him.

Kaoru Ikeya, who studied philosophy and fine art at Doshisha University in Kyoto, started his career making documentaries for television. As a filmmaker, he has consistently focused his work in China. His other films include Daughter from Yan'an, which won a number of international awards, and Yan'an: Yellow Soil and the New Reality. The Ants also received the Humanitarian Award for Outstanding Documentary at the Hong Kong International Film Festival.