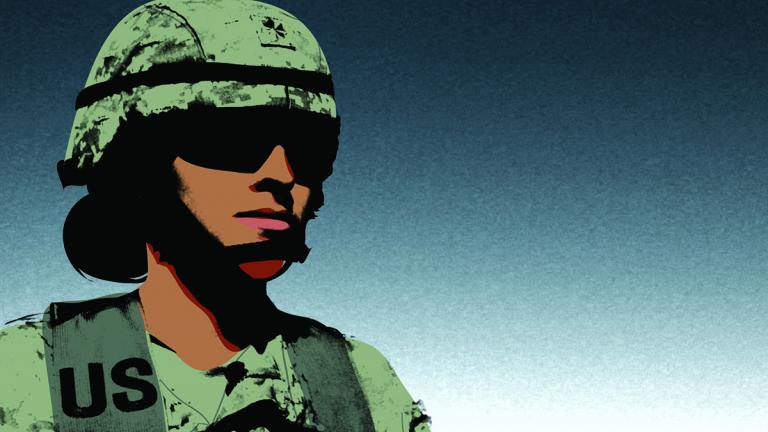 Lioness, directed and produced by Meg McLagan and Daria Sommers, is the winner of the 2008 CDS Filmmaker Award, presented at the Full Frame Documentary Film Festival in Durham, North Carolina. The eighth film to win the annual award, Lioness tells the story of a group of women soldiers sent into direct ground combat in Iraq, a violation of official U.S. military policy, and the psychological and emotional aftermath of those experiences once they returned home.

In 2003 these women soldiers went to Iraq as mechanics, supply clerks, and engineers, but soon were enlisted to ease tension with local civilians and, dubbed Team Lioness by their commanders, ended up accompanying male combat units on missions that led to deadly counterinsurgency battles. Lioness—with intimate portrayals, footage from the streets of Iraq, journal entries, and candid interviews—follows five of these women as they recall their time on the battlefield and adjust to their lives back home, part of America’s first generation of female combat veterans.

The CDS Filmmaker Award, which comes with a $7,500 prize, recognizes documentary films that combine originality and creativity with firsthand experience in examining central issues of contemporary life and culture. In keeping with the CDS mission, the award was created to honor and support documentary artists whose works are potential catalysts for education and change.

Five years ago, like all Americans, we watched reports of the invasion of Iraq. As the smoke screen of victory vanished along with the orderly notion of a “frontline,” a recurring footnote emerged in the press: It wasn’t just young men who were fighting, it was young women too—mothers, daughters, sisters, and wives. It seemed clear to us that some kind of turning point had been reached.

As citizens, we were interested in who these women were who were serving in out name. As women, we were curious about how the experience of combat—historically a male activity—filtered through a female perspective. As filmmakers, we were troubled by the way images of female soldiers had stagnated in the public imagination, polarized between Jessica Lynch at one extreme and Lynndie England at the other.

After learning about the Lionesses of the 1st Engineer Battalion, we began to piece together their story. We visited the Army bases where they lived upon their return from Iraq and got to know them. We realized that the women’s experiences were emblematic of larger shifts taking place in the military. These shifts, which began on the ground in Ramadi, signaled a recognition that winning the “hearts and minds” of civilians in insurgencies is as important as the use of force. The Lionesses were critical to this approach, functioning as the “tip of the spear.”

At times their new roles led them into direct ground combat, something for which they were not trained and were told they could never do when they joined the military. As the war continues, and with it the Lioness program, the question is not whether women should be in combat. The issue is when will American society acknowledge the gap between an outdated policy intended to keep women from serving on the frontlines and the reality of what they are being asked to do on the ground in Iraq.

Meg McLagan is a documentary filmmaker and cultural anthropologist. Her films include Tibet in Exile, which was broadcast on PBS, and Paris Is Burning (associate producer), which won the documentary Grand Jury Prize at Sundance. From 1998 to 2005, she taught in the Program in Culture and Media at New York University. She has published essays on media and activism and is currently co-editing a book on the subject. She received a B.A. from Yale University and a Ph.D. from New York University.

Daria Sommers got her start on the PBS series Smithsonian World. She wrote and directed the award-winning Eastern Spirit, Western World, a portrait of Chinese American artist Diana Kan, Duncan’s Shadow, and the award-winning Ready to Burn. She recently completed Sawadika American Girl, a feature screenplay based on her experiences growing up in Thailand in the shadow of the Vietnam War. She is a graduate of Oberlin College.