Aunties: The Seven Summers of Alevtina and Ludmila

In northwest Russia, in a small village called Alekhovshchina, Nadia Sablin’s aunts spend the warmer months together in the family home and live as the family has always lived—chopping wood to heat the house, bringing water from the well, planting potatoes, and making their own clothes. Sablin’s remarkably lyrical and evocative photographs, taken over seven summers, capture the small details and daily rituals of her aunts’ surprisingly colorful and dreamlike days, taking us not only to another country but to another time. Alevtina and Ludmila, now in their seventies, seem both old and young, as if time itself was as seamless and cyclical as their routines—working on puzzles, sewing curtains, tatting lace, picking berries, repairing fences—and as full of the same subtle mysteries. Sablin collaborated with her aunts to recreate scenes she remembered from her childhood and to make new images of the patterns of their days. In these photographs, Sablin combines observation and invention, biography and autobiography, to tell the stories of her aunts’ life together, and in the process, quilts together a thoughtful meditation on memory, aging, and belonging.

“Nadia Sablin, who was born in Russia but has lived in the United States since she was a girl, has visited her father’s sisters each summer for seven years now, finding comfort in knowing them and celebrating the lives they have chosen for themselves. . . . Their bright clothing, the pleasing picturesqueness of their home and surroundings, bring to mind the bright-colored illustrations in Russian fairy-tale books that were so important to such modern artists as Wassily Kandinsky. In these pictures it is always spring or summer, the garden flourishes, the women enjoy the span of the seasons. The photographs are warm with an aroma of the magical. . . . [Sablin] chooses to show their way of living as almost enchanted: we can hardly believe that what we see in these pictures will ever disappear.”
—Sandra S. Phillips, Prize Judge 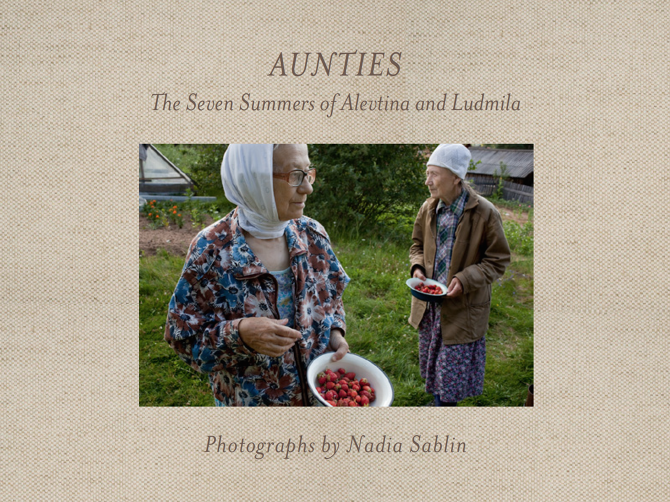