In 1942, Bill Manbo and his family were forced from their Hollywood home into the Japanese American internment camp at Heart Mountain in Wyoming. While there, Manbo documented both the bleakness and beauty of his surroundings using Kodachrome film—a technology then just seven years old—to capture community celebrations and to record his family’s struggle to maintain a normal life under the harsh conditions of racial imprisonment. Colors of Confinement showcases sixty-five stunning images from this extremely rare collection of color photographs, presented along with three interpretive essays by leading scholars and a reflective, personal essay by a former Heart Mountain internee.

The subjects of these haunting photos are the routine fare of an amateur photographer: parades, cultural events, people at play, Manbo’s son. But the images are set against the backdrop of the barbed-wire enclosure surrounding the Heart Mountain Relocation Center and the dramatic expanse of Wyoming sky and landscape. The accompanying essays illuminate these scenes as they trace a tumultuous history unfolding just beyond the camera’s lens, giving readers insight into Japanese American cultural life and the stark realities of life in the camps.

“While a range of documentarians and journalists made various kinds of records of the realities of Japanese internment camps during World War II, Bill Manbo’s work is more personal, intimate, and complex. Perhaps beginning with the universal documentary impulse to use the camera to reflect and remember, Manbo made images that bear witness to what he, his family, and others experienced in the internment drama at Heart Mountain, Wyoming. Now, many years later, his images provide an even wider and more compelling view of this history, one that begins with the personal and extends across the landscapes of time and place.”
—Tom Rankin, director, Center for Documentary Studies, from the foreword

“The color photographs of Bill Manbo are at once beautiful, poignant, and stinging with irony. Young girls in vibrantly colorful kimono dancing in front of black tar-paper barracks; a teenager in full Boy Scout uniform lifting the Stars & Stripes up high in a U.S. concentration camp; these are pictures of resilience and fortitude from a dark chapter of American history.”
—George Takei, American actor of Japanese descent, chairman emeritus of the board of trustees for the Japanese American National Museum 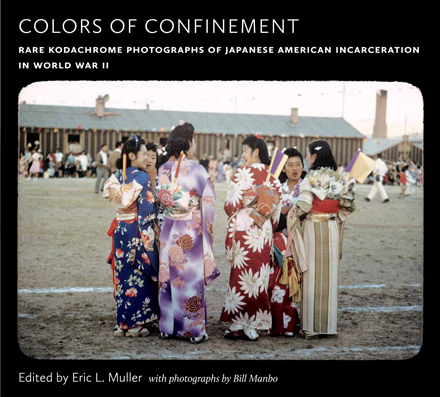