Helen Levitt, winner of the 1997 International Center of Photography’s Master of Photography Infinity Award, visited Mexico City in 1941. This collection of images from that visit (most never before published or exhibited) portrays a city on the cusp of modernity, captured by Levitt with compelling force and dry wit. These images show street scenes in Chapultepec Park and other distinctly urban zones, as well as the working class neighborhoods then on the periphery of the city. More than a half-century later, Levitt's photographs unlock the past, helping to decipher the sprawling city of today.

“Helen Levitt's extraordinary gift is to perceive in a transient split second, and in the most ordinary of places—the common city street—the richly imaginative, various, and tragically tender moments of ordinary human existence.”
—Wallace Stevens

“Movement, or more specifically, cinematic movement, the moving camera, is what Levitt's work suggests. . . . Her images . . . are quietly stunning. Whether the subject is merchants at market, beggars on street curbs, children making a game out of garbage, or well-heeled individuals strolling through a park, Levitt's lens seems to have captured more than the eyes can absorb. Like stills from a Buñuel film that was never made, Levitt's work isn't sentimental but is more exacting; she does not seek out but also does not shy away from brutal realities.”
—Booklist

“Like Levitt’s New York photos, these images remind us of what we love about cities: the promise that something intriguing, tragic, or hilarious—something endlessly and indefinable human—waits, perhaps just around the corner.”
—Elle

“The celebrated photographer Helen Levitt spent several months in [Mexico City in 1941] capturing images of the struggle and humour of life at street level. Since then the city has grown tenfold, but Levitt’s black and white images, now brought together for the first time in a book, might help modern-day visitors to see through the urban sprawl.”
—The Sunday Times 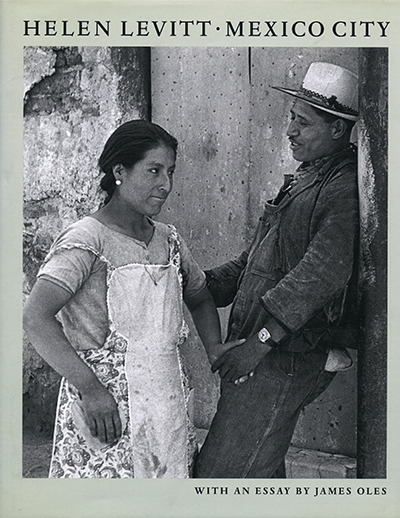