Old and on Their Own

We all want to live to a ripe old age, but what will it feel like when we get there? Pulitzer Prize–winner Robert Coles celebrates the continued independence of women and men over seventy-five years old in these stories of stamina, humor, and hope spanning a century of American life. Alex Harris and Thomas Roma's photographs of the older citizens in their communities are a powerful complement to the voices heard here-—these spirited individuals show us how to live our later years to the fullest.

“Listen to Nellie, who at 95 greets the dawn: ‘Fancy meeting you one more time.’ Nearly blind, she tracks time by shadows. ‘I talk to the light,’ she says, ‘and I hear the darkness.’ Or George, 99, a self-taught ‘jack-of-all-trades’ who mocks his own . . . ‘exuberance of verbosity.’ . . . Robert Coles comments, ‘Ready to fall, but not yet, strangely enough, not yet.’ That is true of all eleven people who talk to Coles, a psychiatrist, in Old and On Their Own, and is evidently true of the forty-one who speak in striking photographs by Alex Harris and Thomas Roma.”
—John L. Hess, The Nation

“Coles interviewed people ranging in age from 75 to 100. . . . [and] sought to discover what factors contributed to ‘the quiet perseverance’ that gave the elderly the will to live on their own. Among other things, he found, they had kept a sense of humor despite physical decline and the loss of family and friends. In addition, their long lives and experiences helped them adjust to change and maintain emotional balance.”
—Washington Post Book World 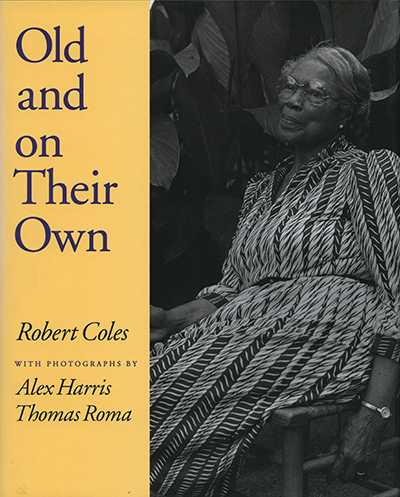