When Peter Brown began to photograph the Great Plains, he started a journey that would take him over a dozen years and many thousands of miles to complete. Brown's photographs make a careful study of the land and sky of the Plains, and of the people who inhabit its towns and cities, showing us the endless variations of color, light, mood, and character. In Brown's portraits we see the Plains in all its seasons, an ever-changing landscape of extremes, where human existence is at once fragile and resilient. These provocative images reveal both the stunning drama and subtle charms of the land and people of this vast swath of America which includes the Dakotas, Nebraska, Kansas, Oklahoma, Wyoming, Montana, Colorado, Utah, Texas, and New Mexico.

"It is this America, in all its otherness, that Peter Brown has presented to us, with its complexity and simplicity, its banality and beauty, its ordinary grace."
—Kathleen Norris, from her introduction

“Peter Brown transforms the ostensibly featureless expanse of the Great Plains of the American West into an infinitely varied photographic space subtly inscribed with memory and history. Brown’s as-if-faded colours are reminiscent of Richard Misrach’s desert scenes; certainly he takes his place alongside Misrach as one of the pre-eminent photographers of the American landscape.”
—Geoff Dyer, The Independent, “Photography Books of the Year”

“In On the Plains . . . colors are subdued, uninterrupted horizons have the effect of sharpening detail, and the simple expansiveness becomes abstraction. . . . As this book shows, the empty earth can be fuller than populated places.”
—The Washington Post Book World

“If you’ve always thought of the Plains as just flat, empty space broken up only by telephone poles and roads, you haven’t looked hard or long enough to see what’s there. . . . If you’re of a mind to connect with modern-day frontiersmen or one of the West’s most . . . starkly beautiful places, get the book.”
—American Cowboy 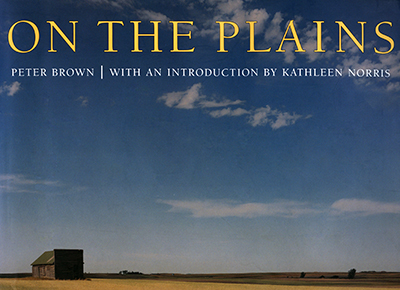