Pentecostal serpent handlers, also known as Signs Followers, hold a literal interpretation of a verse in the New Testament’s Gospel of Mark which states that, among other abilities, true believers shall be able to “take up serpents.” For more than a century members of this uniquely Appalachian religious tradition have handled venomous snakes during their worship services, risking death as evidence of their unwavering faith. Despite scores of deaths from snakebite and the closure of numerous churches in recent decades, there remains a small contingent of serpent handlers devoted to keeping the practice alive.

Who are the serpent handlers? What motivates them to continue their potentially lethal practices through the generations? Documentary photographer Lauren Pond traveled to West Virginia in search of answers to these questions. There she met Pastor Randy “Mack” Wolford, one of the best-known Signs Following preachers in the region, and spent the following year documenting Mack and his family. The course of her work changed dramatically in May 2012, when Mack, then forty-four years old, suffered a fatal rattlesnake bite during a worship service she attended. Pond photographed the events that followed and has continued her relationship with Mack’s family.

Test of Faith provides a deeply nuanced, personal look at serpent handling that not only invites greater understanding of a religious practice that has long faced derision and criticism; it also serves as a meditation on the photographic process, its ethics, and its capacity to generate empathy.

Lauren Pond is the winner of the 2017 CDS/Honickman First Book Prize in Photography.

Lauren Pond, a documentary photographer who specializes in faith and religion, is currently the multimedia content producer for the American Religious Sounds Project within The Ohio State University’s Center for the Study of Religion. She also manages an art gallery and works on freelance projects across the country. She received her Master of Arts degree in photojournalism from Ohio University’s School of Visual Communication in 2014, and bachelor’s degrees in journalism and art from Northwestern University in 2009. Pond’s photographs have appeared in such publications as the New York Times, the Washington Post, and the Wall Street Journal, and have been recognized by the Magnum/Inge Morath Foundations, the Lucie Foundation, FotoVisura, Photo District News, College Photographer of the Year, and the William Randolph Hearst Foundation, among others. She has spoken about her work at universities and conferences across the United States.

"Lauren Pond's beautifully intimate portraits of spiritual yearning and loss should be reminders to all the rest of us that 'feeling after God' is dangerous business and was never intended to be otherwise." — Dennis Covington, author of, Salvation on Sand Mountain: Snake Handling and Redemption in Southern Appalachia

“Lauren Pond plunges us into the hothouse atmosphere of the Wolfords’ faith. Through her photographs, I can almost feel the physical strain of Mack’s worship, and I long to hear the song that his mother, Snook, sings as he accompanies her on guitar. Who are these purposeful, vibrant people so different from myself? Test of Faith commands this question and prompts me to consider the basis and limitations of my own worldview.”—Peter Barberie, prize judge and Brodsky Curator of Photographs, Alfred Stieglitz Center, Philadelphia Museum of Art

“I no longer see my images as documentation of serpent handling practice and culture. Instead, they serve as a record of my rich friendship with the Wolfords, our shared experiences, and the valuable insights they have given me into the tenets of their faith—namely, forgiveness and redemption.”—Lauren Pond

"Mack Wolford and his family are holiness people who take up serpents as a simple act of obedience based upon their understanding of the Gospel of Mark. Lauren Pond's wonderful photos are visual windows into their lives. They may test your own faith. No holiness handler would urge you to violate your own faith. All would urge you simply to pray for, and perhaps, like Lauren, with, those whose faith seems distant from your own." — Ralph W. Hood Jr., Professor of Psychology and LeRoy A. Martin Distinguished Professor of Religious Studies, University of Tennessee, Chattanooga 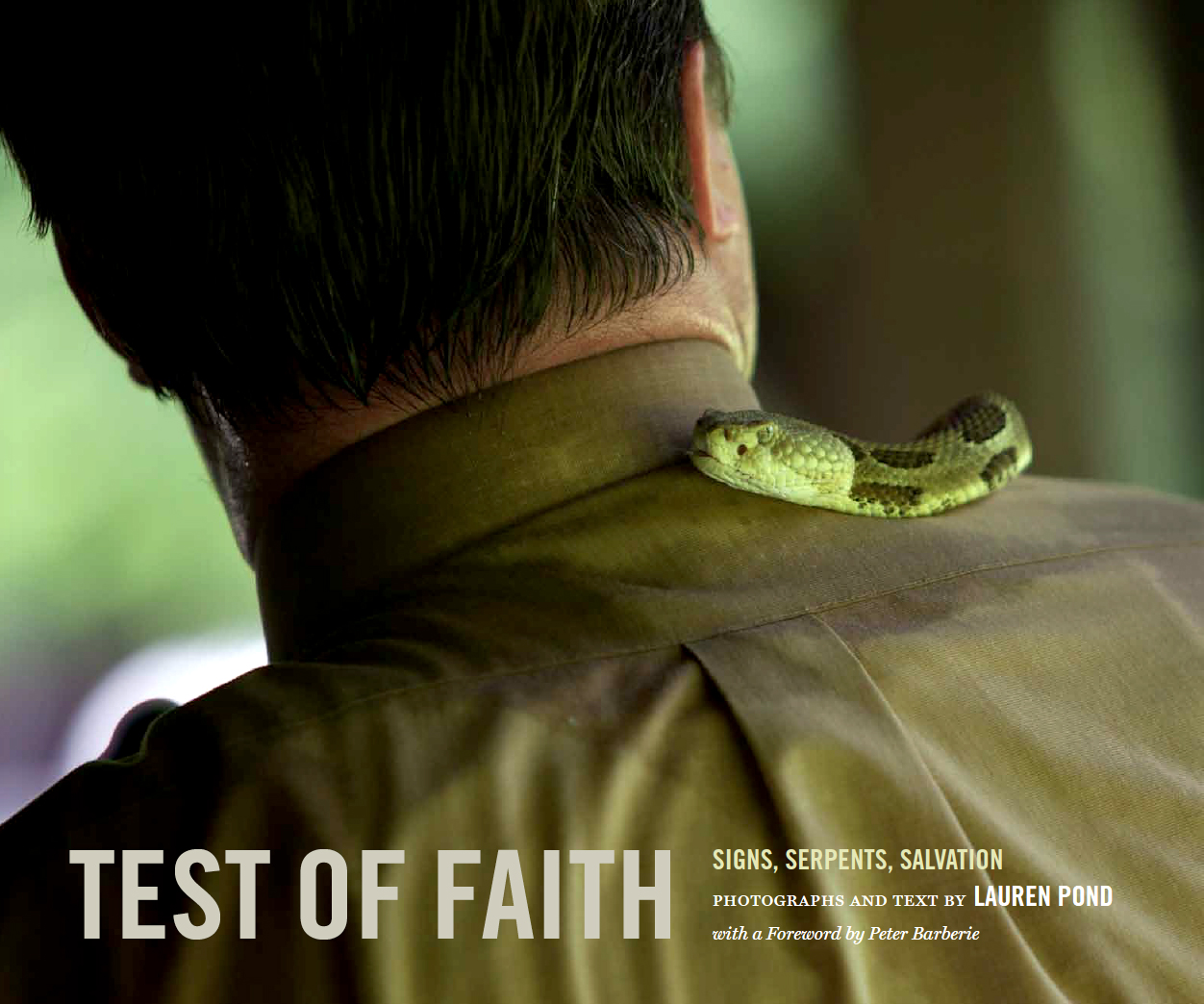