Looking Back: 9/11 Across America 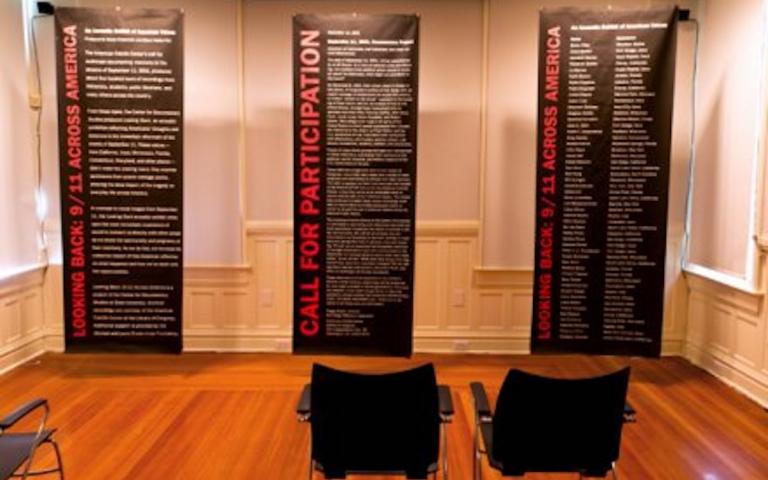 On September 12, 2001, the day after devastating terrorist attacks shook the country, conversations at the American Folklife Center recalled Alan Lomax’s response to another historic breach of U.S. territory. On December 8, 1941, Lomax, then in charge of the Library of Congress Archive of American Folk Song, called on a team of historians and folklorists to collect American reactions to the surprise attack on Pearl Harbor.

Sixty years later, the American Folklife Center in Washington, D.C., put out a similar call for people to document on audiotape “the immediate reactions of average Americans in your own communities to yesterday’s attacks [and] how their lives have been changed.” Folklorists, students, public librarians, and many others responded with about 500 hours of recordings.

From these tapes, the Center for Documentary Studies produced Looking Back, an acoustic installation reflecting Americans’ thoughts and emotions in the immediate aftermath of the events of September 11. These voices—from California, Iowa, Minnesota, Florida, Connecticut, Maryland, and other places—didn’t make the evening news; they express sentiments from quieter vantage points, showing the deep impact of the tragedy on everyday life across the country.

In contrast to visual images from September 11, the Looking Back acoustic exhibit relies upon the more immediate experience of sound to connect us directly with other people as we share the spontaneity and poignancy of their reactions.

Looking Back is a companion exhibition to O’ Say Can You See: Installation by Laura Poitras, featuring projected imagery from Ground Zero, 2001, in the Kreps Gallery, Center for Documentary Studies, through October 22, 2011.

Looking Back: 9/11 Across America, a project of the Center for Documentary Studies, was produced by Sarah Chasnovitz and Elena Hadler Perl in 2002. Archival recordings are courtesy of the American Folklife Center of the Library of Congress. Additional support was provided by the Michael and Laura Brader-Araje Foundation.