POSTPONED: there are gardens at the margins 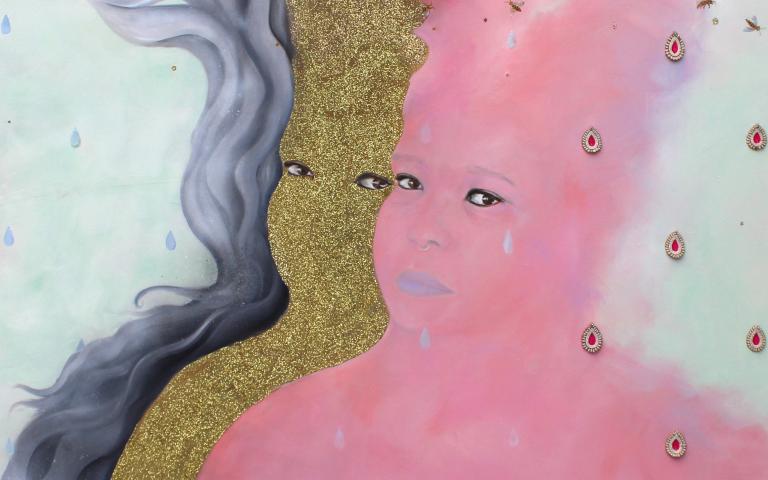 NOTICE: CDS is currently closed to the general public due to safety concerns related to Covid-19.

there are gardens at the margins is a series of monumental portraits of queer Muslims living in the American South by Saba Taj, a visual artist based in Durham, North Carolina. The glittering artworks celebrate the abundance of subjects who embody liminality and the impossible.

“Being queer saved my life. Often we see queerness as deprivation. But when I look at my life, I saw that queerness demanded an alternative innovation from me. I had to make alternative routes; it made me curious; it made me ask, ‘Is this enough for me?’” —Ocean Vuong

In my work, I forefront the power and complexity of minoritized peoples, particularly those who flourish in the chasms and intersections between essentialist categories of identity. there are gardens at the margins is a series of portraits of queer Muslims in the American South, a group widely judged as “impossible” or paradoxical. My sustained relationships with subjects and the commonalities of our experiences are crucial to the reciprocity of the work, as I relate to them not as an outside observer, but as a comrade. In the resulting portraits, subjects emerge from surrealist dreamscapes cloaked with color and glitter, partial concealments that serve to maintain, rather than rectify, the implacability of these figures in mainstream American discourse. With these strategies, I aim to interrupt the lacerating gaze, and as Trinh Minh-Ha describes, “speak nearby, in proximity . . . suspend meaning, preventing it from merely closing and hence leaving a gap in the formation process.”

Into this gap, I interject beauty as a language for devotion, an antidote for harm, and an alternative for publicly leveraging trauma in exchange for humanity. I render subjects and their environments lavishly; they shimmer with glitter, rhinestones, appliqués, and beads, objects, and imagery that are drawn from our queer and diasporic heritages. Sewing in items like bridal tulle, golden thread, and brocaded trims, I approach each artwork as a love letter, employing embellishment as a ritual of care.

This work is for my friends at the intersections, the borders, the threshold, who deserve to be witnessed in the lush and liberatory liminal spaces they create and reside in.

there are gardens
at the margins
why choose to be concrete
when you can be alive?