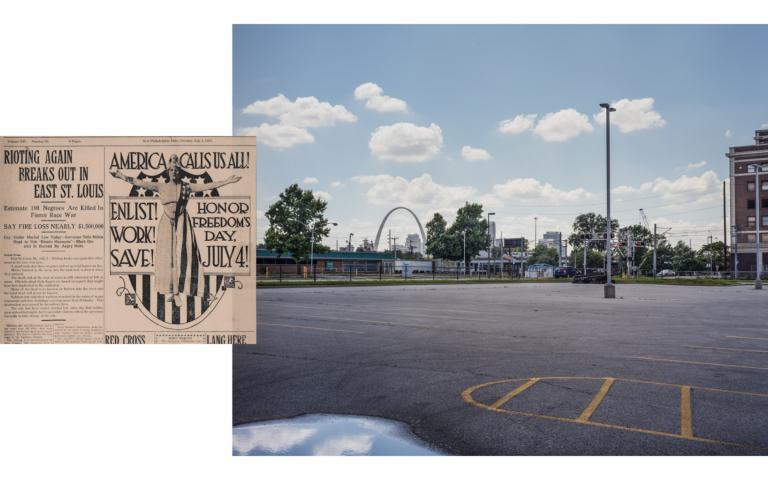 The Red Summer exhibition is produced in collaboration with Duke's Archive of Documentary Arts, which is hosting a simultaneous exhibition of Wendel White's Manifest project.

Artist's Statement:
The Red Summer portfolio represents the stories of various locations in the American landscape where racial violence (often characterized as “Race Wars” at the time) erupted between 1917 and 1923. These years of conflict reveal several aspects of racial anxiety that inform our contemporary experience, including, though not limited to; racism, fear of violent black revolt, lynching, poverty, mass incarceration, and competition for employment.

Though the events of the early twentieth century seem remote, and fading apparitions of an American past, my work is concerned with the powerful influence of the past in the present for individuals, and for public and private institutions. The American narrative tends to promote the notion that inherited values and property represent progress toward a more equitable and moral society. American exceptionalism assumes that we discard (rather than transform) the immoral values or misguided thinking of the past. In The Matthew Effect: How Advantage Begets Advantage, Daniel Rigney makes a compelling case for “advantage” (of all sorts, including wealth) as an entity that accrues interest or value for those that have it and a deficit for those that do not. Over time advantage grows almost without effort while disadvantage becomes increasing harder to overcome.

The upheaval of Red Summer occurred approximately fifty years after the American Civil War and fifty years before the height of the Civil Rights Era.

The project is a series of large format prints (currently available at 24” x 42”) that combine photographs of the contemporary landscape made at or near the site of racial conflict with fragmented selections of contemporaneous newspaper reporting (1917–1923). In many cases the newsprint images include the surrounding stories or advertisements. The combination of the landscape photograph and the reproduction of newspaper fragments, usually being reported within a few days of the riots, is a rupture of the timeline (these places are not what they seem) and a conversation between the present and the past.

The veil (DuBois) has been a visual metaphor for the representation of race within my work for several decades; particularly in the two projects known as, Schools for the Colored and Red Summer. The newspaper, as a form of public record and commentary, are the veil of information through which most of the country as well as many in the international community, understood and misunderstood these events.