The Restraints: Open and Hidden 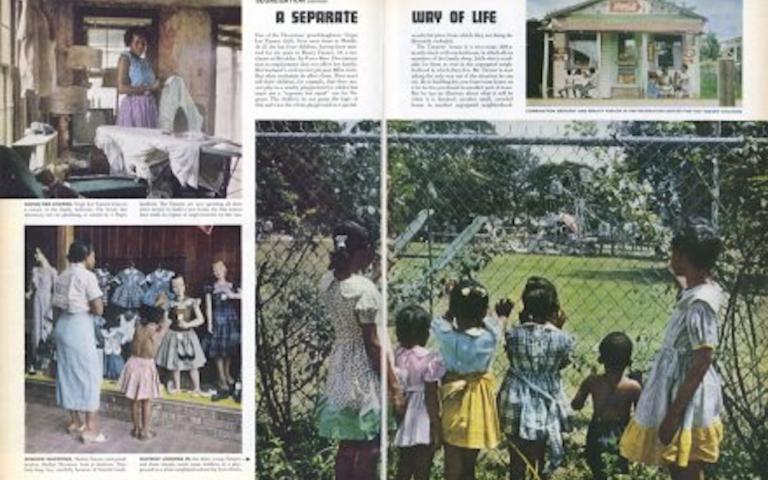 Renaissance man Gordon Parks would have been one hundred years old on November 30, 2012 (he died in 2006, at 93). As a young man during the Depression, he joined the Civil Conservation Corps, the New Deal work relief program; played semi-professional sports; and did various odd jobs until 1942, when he joined the Library of Congress’s Farm Security Administration (FSA) as the first [Julius] Rosenwald Fellow in photography. Parks was exposed to racism and segregation in Washington, D.C., in ways he hadn't experienced while living in Minnesota or Chicago; FSA photo team head Roy Stryker pushed him to strike back at the discrimination with his camera. In 1948, he became the first African-American to work as a staff photographer for Life magazine. In his twenty years at the iconic publication, he sought to challenge stereotypes while still appealing to a larger audience. The Restraints: Open and Hidden is an exhibition of a color photo essay of the same name that Life ran in 1956; the piece sought to show the magazine’s (largely white) audience that black people, even those living under segregation, lived full, rich, ordinary lives. The exhibit coincided with Duke University’s commemoration of the 50th anniversary of the enrollment of African American students.

In a related event, Deborah Willis gave a presentation on Gordon Parks at Duke’s Nasher Museum of Art on November 16, 2012, at 6 p.m. Willis is chair and professor of photography and imaging at the Tisch School of the Arts at New York University and one of the nation’s leading historians of African American photography. She is a contributor to a five-book series, Collected Works: Gordon Parks, released in late fall 2012. Willis judged the 2012 CDS/Honickman First Book Prize in Photography, co-sponsored by the Center for Documentary Studies and the Honickman Foundation.