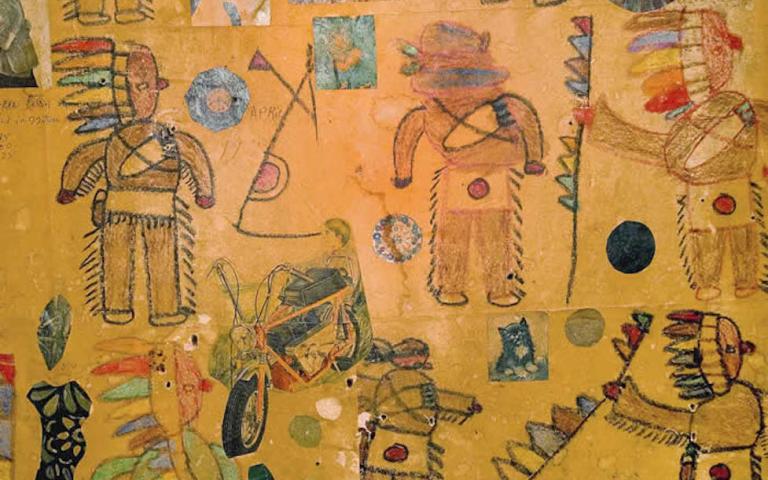 Several years ago while working with a church-sponsored youth camp in western North Carolina, I visited one of the service sites where the kids were volunteering. The walls of the house were decorated with drawings and cutouts from magazines and catalogs. I had the good fortune to meet the two brothers, both in their sixties, who lived there and who created these artworks. After this chance meeting, I continued to think I really should go photograph those walls and preserve some of those images.

So I did. I photographed all of the rooms and details of the wall art, which are quite beautiful and lyrical. Both of the brothers are developmentally disabled and during their childhood on the family farm, their mother set them to drawing and cutting out images. The walls of the house are completely covered with drawings and collages, with most of the rooms finished by the brothers’ early adulthood.

On these walls it is possible to trace the history of the men—as boys growing up, the changing times, and the influence both their mother and their niece had on their selection of images. In looking at these rooms, and seeing how the brothers’ art developed over time, many layers of meaning are revealed, and it is clear that the result of their mother’s effort to create a safe place for them, their own place, lasted for most of their lives. The brothers continued to live at home until recently. In 2008, they moved into an adult-care home, because their aging sister could no longer manage their care.

Pac McLaurin is a self-described self-taught photographer who has attended many workshops and enjoyed mentorships with various photographers including Steve Anchell, Al Weber, and Sam Abell. He teaches courses in photography at Appalachian State University, including documentary photography, and has conducted multiple overseas student workshops.