Paul Hendrickson’s most recent book, Sons of Mississippi (Alfred A. Knopf, 2003), a study of the legacy of racism in the families of seven Mississippi sheriffs of the 1960s, won the National Book Critics Circle Award in general nonfiction and the Heartland Prize presented annually by the Chicago Tribune. In addition, it was named by many newspapers to their “Top 10” lists for books published in 2003. The research and writing, which took about five years, were supported by a Guggenheim Foundation fellowship and a National Endowment for the Arts literature fellowship.

Before joining the faculty at the University of Pennsylvania, where he received the Provost’s Award for Distinguished Teaching in 2005, Hendrickson worked for thirty years in daily journalism. He was a staff feature writer at the Washington Post from 1977 to 2001. Eventually, he came to understand the truth of the old saying that the legs are the first to go, and that the honorable and difficult business of writing perishable pieces on deadline belonged to younger people. He needed to try to find a place--a home--where he could continue to work on books and the occasional magazine article and to be involved with gifted, creative people. So now, luck beyond dream, fortune beyond hope, he finds himself conducting writing workshops full time at Penn in advanced nonfiction.

The neophyte professor, hardly young anymore, was born in California but grew up in the Midwest and in a Catholic seminary in the Deep South, where he studied seven years for the missionary priesthood. This became the subject of his first book, published in 1983: Seminary: A Search. His other books are: Looking for the Light: The Hidden Life and Art of Marion Post Wolcott (a finalist for the 1992 National Book Critics Circle Award); and The Living and the Dead: Robert McNamara and Five Lives of a Lost War (finalist for the National Book Award in 1996). They, too, were published by Knopf.

Hendrickson has degrees in American literature from St. Louis University and Penn State. He is married and lives with his family (world-class wife, two world-class sons) in Havertown, Pennsylvania. Oh, yes: He’s deep into his next nonfiction book, which has to do with Ernest Hemingway. 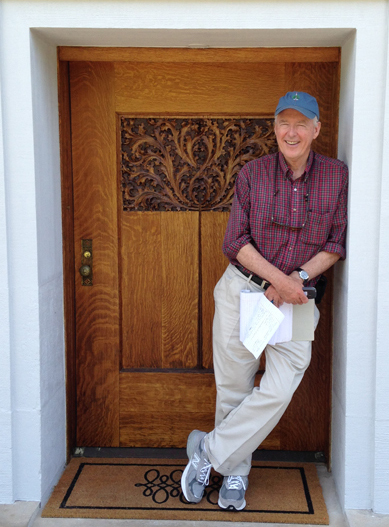