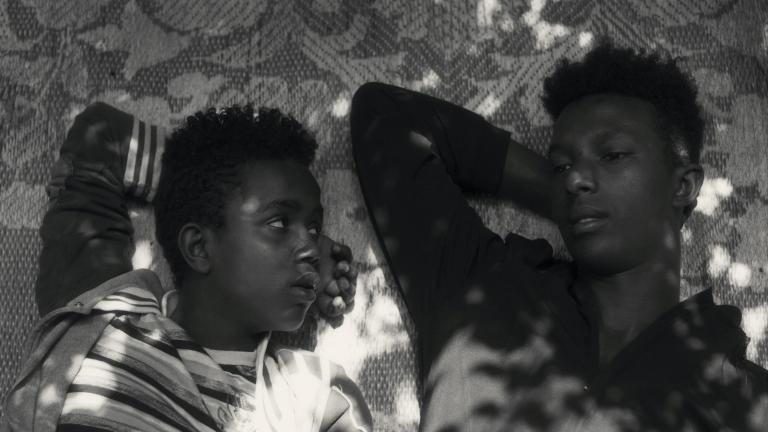 Faya Dayi, directed by Jessica Beshir, has won the 2021 CDS Filmmaker Award, which is presented in conjunction with the Center for Documentary Studies’ annual Full Frame Documentary Film Festival. The $7,500 CDS Filmmaker Award recognizes a documentary film that combines creativity and experience in examining contemporary society, heightens awareness of a compelling issue, and serves as a potential catalyst for change. The twenty-first film to win the award, and Beshir’s debut feature documentary, Faya Dayi was filmed in Harar, the rural Ethiopian town where she grew up.

As Full Frame selection committee member Ted Mott writes, “Faya Dayi takes as its subject the khat trade, borrowing its title from a hymnal chant recited by the stimulant plant’s harvesters. In Harar, all lives are seemingly touched by khat, and its pervasive influence ranges from its integral role in Sufi rituals to being the backbone of the region’s economy. Khat’s societal impact is compounded and magnified by the leaf’s addictive properties, which (dis)affect the region’s youth in particular.

“Trading exposition for evocation, the film is a lyrical and affecting coming-of-age portrait of the dreams—both pursued and dashed—held by teenaged protagonist Mohammed and his friends. The dream motif extends to the film’s mesmerizing atmosphere and observational narrative journey, rendered in sumptuous black-and-white photography that casts an impressionistic spell as it weaves along paths, through windows, and toward horizons that serve as eloquent symbols of youthful longing and escape.”

Jurors for the Center for Documentary Studies: Eric Barstow, Kelsey Favret, Wesley Hogan, Jasmine Huff, Quadiriah McCullough, Lynn McKnight, and Elena Rue wrote this statement about choosing Faya Dayi for the Filmmaker Award: “Lyrically edited, yet balanced with an unflinching eye, this year’s award-winning film reveals hard truths and intimate moments. It demands meditative patience from us as an audience. To respond to its bold challenge, we found ourselves continually giving it what it deserved, despite the difficulty of today’s extreme-pace, distractive, and overbearing cultural norms.

Tonally vibrant in rich black and white, we are enriched by this cinematographic achievement. We found Jessica Beshir’s use of the black-and-white form a means to subvert colonial gazes and to highlight the care of her treatment of this community. Beshir refuses binaries—showing us a nearly infinite and luminous range of shades in black. We see, for instance, a sumptuousness of color in her exposure of light on khat that mirrors the richness of life and variation of humanity she makes as a conscious choice to edit into our visual and mental frames.

If her range of tonality is such a striking achievement, it is no less so than her representation of Ethiopia, suffused with a loving, nurturing imagery informed by her connections and ties to the community she grew up in. Her work thus innately confronts western biases through her careful construction of people working to survive and her stark honesty about their dire circumstances. Yet she never objectifies the people in this film or their circumstances. Further, her filming inside cultural spaces where women aren’t traditionally allowed also shows her undeniable power as a trusted artist and storyteller.

As with any great work of nonfiction, it left us as a jury wanting to learn more. Her artistic and technical virtuosity allows audiences to appreciate the universality of themes explored in the film: an ongoing thread reveals people facing dire economic situations who find ways to survive and sometimes thrive. Given that this is Jessica Beshir’s first feature-length film, we can’t imagine a filmmaker we’d like to support with greater enthusiasm. As one jury member said, ‘I can’t wait to see what else she does in her career!’”

The film was also awarded the Reva and David Logan Grand Jury Award and the Charles E. Guggenheim Emerging Artist Award at this year’s festival.