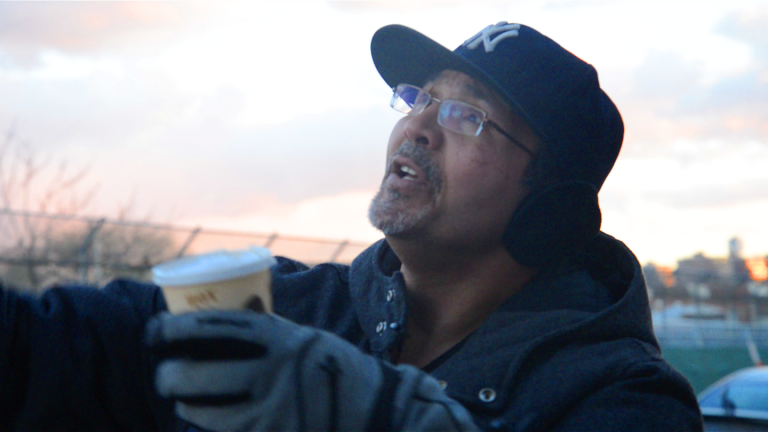 My first day at the Center for Family Life, I met Wilfredo "Freddie" Pedrero, and my entire project began to unfold before my eyes. I was enchanted by Freddie from the beginning. Everything about him: the cadence of his voice, his larger-than-life body language, his childlike excitement about the comic books in his backpack, and his constant spewing of wisdom garnered from 50+ years living in the projects in Coney Island and on the streets. Freddie was, to put it simply, a dream subject.

We began by spending time together without the camera. Freddie's main responsibility at CFL is manning the emergency food pantry, which provides free packages of food for families living in the area. Freddie handles inventory, stocks the pantry and assembles and distributes the food packages. For the first month, I would come to the pantry to help him assemble packages and watch him work.

After this, I started bringing the camera and a microphone. I'd interview Freddie as he worked, we'd go outside for smoke breaks and walk to the corner deli for coffee. Freddie took to being in front of the camera like he'd been doing it his whole life. As we walked down the street, it was clear that Freddie derived immense joy from the attention he received from me and my camera.

Over the next couple of months, I'd hang out with Freddie and shoot. Most of the time there was nothing particularly special going on -- just lots of cans to be stacked, lots of cigarettes, lots of coffee. Occasionally we'd go to his apartment in the Marlboro projects in Coney Island. The one exception to the routine of our shoots was the day of the CFL Community Fundraiser, which happened in early May. Freddie accepted the Celebrating Community Award in a newly-purchased maroon suit.

"You're famous!" a pedestrian once shouted at Freddie as we strolled down 39th Street. It was raining and grey and Freddie and I were huddled under one umbrella, my camera less than a foot away from his face.

"Haha, I wish!" Freddie said. But in the next breath, he added, "No, no...I'm only kidding. But if I was famous, I'd be exactly the same because we're all human beings, just because someone does something that makes them famous they aren't any different."

This equivalence between people is, in fact, a belief Freddie holds dear, and one that is very palpable in the context of his work at CFL. Freddie's trajectory is noticeably similar to that of many who utilize CFL's services, in that most people arrive at the Center in moments of despair, and are then provided with the means to turn things around.

For Freddie, his employment as the emergency food pantry clerk provided this salvation. The job gave him the motivation and the support system to maintain his (at the time) new lifestyle, which was a stark contrast to his years spent on the streets and in and out of rehab battling addiction. Not long after I began shooting with him, Freddie revealed to me that he views his work at the food pantry as a way of paying his "dues." By being able to help out others in need, those in positions he can relate to from the past, he feels as if he is giving back.

It is also because of this parallel between Freddie and those that he helps that my mentors at CFL were so ecstatic for him to be the subject of my project. Freddie not only encapsulates the admirable work ethic and dedication all CFL employees possess, but he also is the perfect example of how CFL can impact peoples' lives in deep ways.

This is the first version of the film "Super Freddie." It tells Freddie's story through the lens of his connection to CFL, with the main arc of the story being the award he received at the Celebrating Community fundraiser to honor his 10 years' of hard work and dedication.