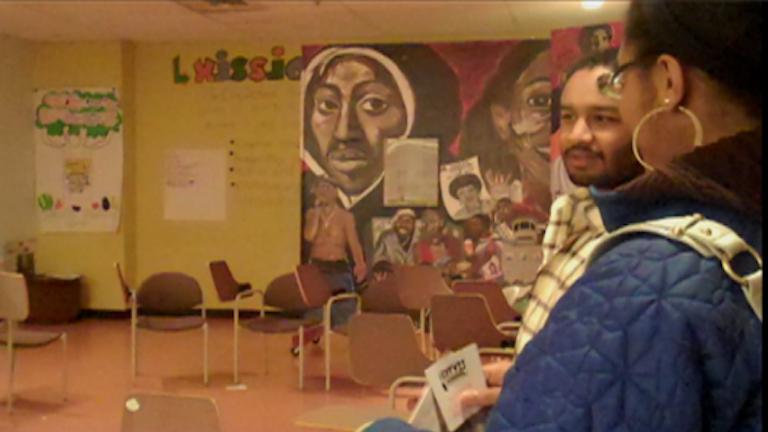 One Wednesday, a month and a half into my Hine Fellowship, I came to The City School (TCS) and found a small table set in the middle of the gathering space. On top of the table was a tall votive candle, still burning, and a photo of Ivol Brown propped up against a bottle of wildflowers. Everything else was business as usual, and no one was paying attention to the little shrine. It didn’t take long for me to find out what had happened. “Didn’t you hear?”—one of the young people filled me in gently—“Ivol was stabbed in front of his house Monday. We met yesterday as a community in this space to process what happened.” As quickly as the explanation had come, its bearer was gone and I stood there alone at the shrine, shocked by the news and by my sense of personal displacement.

That no one had bothered to let me know of Ivol’s murder or of the healing circle was typical of my position at TCS: an outsider through and through. To be fair, I would have known about the events if I had been plugged in to TCS via Facebook; my isolation was as self-imposed as it felt inevitable. I was a gray-haired 41-year-old Midwestern-raised small-town white lady with a video camera that I rarely had with me at the beginning, let alone turned on, who had been sitting in with a bunch of Boston teenagers after school learning leadership skills like I was one of them. And in uncountable ways, I was. I brought my awkward, self-conscious, passive, judgmental self to the circle, participated in every way allowed, and learned, not without shame, that I am a follower—much more comfortable enabling and contributing to the status quo than I liked to think. Many of the teenaged leaders from whom I was learning were leaps and bounds ahead of me in self-confidence, purpose, and vision for a future.

Yet, I listened. One of my greatest “learnings” from the Fellowship experience was to value my passive observer nature and finally to take the leap of faith—ultimately in myself —that is required to tell another’s story publicly, with integrity. Six months before Ivol’s death, I participated as an adult supporter in The Curley Project, (now called Beantown Challenge), an annual middle school violence-intervention project hosted by Beantown Society for 130-200 seventh and eighth graders from the Curley K-8 School in the Jamaica Plain neighborhood. This remarkable, youth-led event planted the seeds of my final Hine project, when I witnessed for the first time young people organizing one another to share their stories, pushing past the usual barriers to sharing in an intimate group setting. The strength I brought to that event as an adult witness was the same strength I relied on as a documentarian: to listen.

I didn’t know it at the time, but Beantown Society is a program that was developed in 2004 by youth from my Hine Fellowship hosting site, The City School, the mission of which is to develop and strengthen the power of youth to work toward building a just society. They do this through creative education and critical thinking, leadership development, action and service, and promoting understanding and relationships across differences. Ivol had been among the fifteen youth who were working at TCS when I joined them to document their Summer Leadership Program (SLP). He died just weeks before SLP kicked off.

Among SLP seminar topics, such as health inequality, poverty, and environmental justice, one of the most popular seminars was on violence and liberation. It was a topic on everybody’s minds, even though nobody seemed to want to talk about it, especially not to me. Ivol’s death, and how commonplace it was (“This is my tenth funeral,” said one young leader at TCS), haunted me throughout my fellowship. Ivol was one of 38 homicide victims in Boston under the age of 25—15 under the age of 20—out of 72 total homicides in 2010.

Being an outsider, and a white adult representing young people of color in the media, I was haunted as much by an internal battle as I was by Ivol’s death. The battle was between what I felt was the inappropriateness of my interest in youth violence as a topic for my Hine project (Wasn’t I perpetuating stereotypes? Shouldn’t I heed the general attitude among youth and some of their adult supporters that focusing the camera on the issue of youth violence was unwelcome? Why couldn’t I be content to document youth resilience in some lighter, more celebratory way?), and the expectation that it precisely should be my focus. This was a Lewis Hine Fellowship, after all, and Hine himself focused on some of the most difficult problems facing youth during his time behind the camera. Sure, I could articulate that I wanted to make a film about how people’s personal life experiences move them to become leaders for positive change in their community. But I wasn’t owning these deeper questions: How can adults in Boston support the youth who are living with the fact that so many young people are killing each other? How can young people support one another? I encourage viewers to consider all of these questions when they watch my final project, To Come Right Back, featuring Beatriz and Adrian Rivera.

Beatriz Rivera had been a teenager at The City School when she started Beantown Society at Spontaneous Celebrations (a community center in nearby Jamaica Plain) with a group of ten other young people through their SLP internships in 2004. Beantown Society’s mission is “to unite youth in Boston across race, class, culture, and neighborhood to end youth violence.” Their vision statement continues: “We believe in changing youth's oppression, neglection [sic], rejection, and depression into youth power. We work towards this vision by offering a youth-run after school program as well as workshops, projects, and events based on youth interests. We provide a space for youth to express themselves, receive one-on-one support, and become leaders in their community.”

In the summer of 2010, when I documented SLP as a Hine Fellow, Beatriz was about to enter her senior year of college. That summer, she was Director of SLP. Beatriz, who describes herself as a “spiritual social activist,” introduced me to her brother, Adrian, who describes himself as a “hustler by any sense.” Beatriz and Adrian grew up together and faced the same struggles as many young people on the streets in Boston, but took two very different paths out of their community. The capstone video for my Hine Fellowship is the story of why one chose to come right back, and the other to come back right. Together, their story is my version of a tribute to programs like SLP and Beantown Society, and to the people who create and sustain them.

The greatest pleasure of my Hine Fellowship was to experience community response from those whose lives and stories are represented in the film. In June 2012, Beantown Society held its first annual fundraising event at Spontaneous Celebrations, where they screened the film as the feature of the evening to a full house. A panel discussion directly followed the screening that included Beatriz, Adrian, and myself, plus second- and third-generation leaders of Beantown Society, now in its eighth year as a program. They surpassed their fundraising goal by 40 percent. When the film was finally embraced by and made useful to an audience of its own subjects, I was able to believe I had adequately heard —and was able to re-tell—what I had been listening to.

Erika Simon has a B.A. (with honors) in English from Earlham College in Indiana, an M.A. in communication studies from UNC - Chapel Hill, and significant experience as an archivist, instructor, oral historian, and filmmaker. 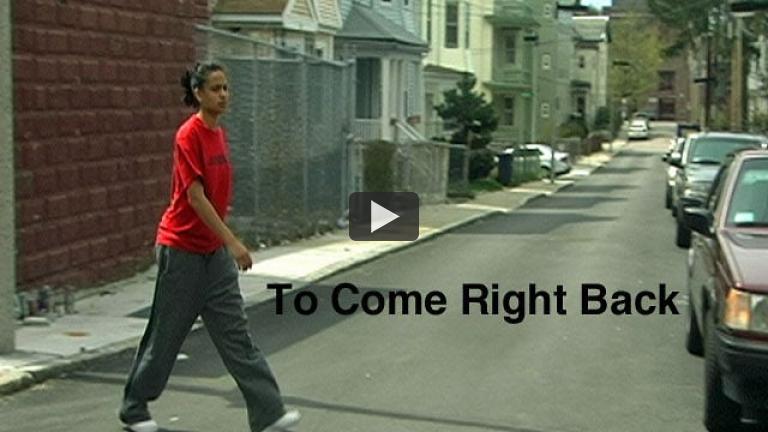 To Come Right Back
Body:

From The City School by Erika Simon (Lewis Hine Fellow 2009-2010). "Beatriz and Adrian Rivera grew up together and faced the same struggles as many young people on the streets in Boston, but took two very different paths out of their community. This is the inspiring story of why one chose to come right back, and the other to come back right." 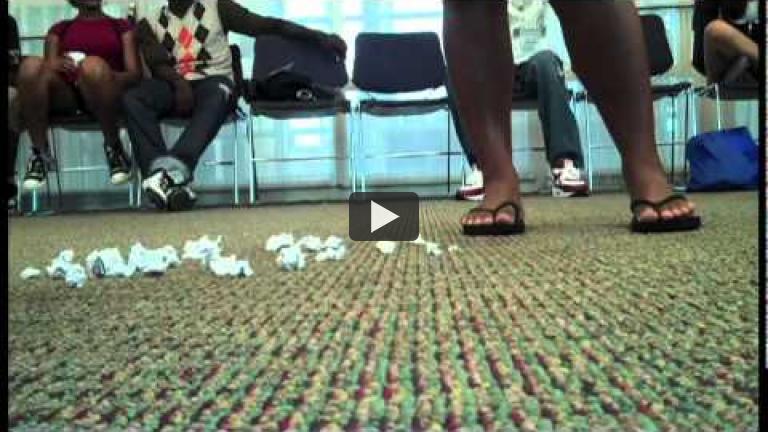 Assemblies: Unity Banner and "Fears on the Floor"
Body:

From The City School by Erika Simon (Lewis Hine Fellow 2009-2010). "Student staff lead icebreakers during morning assemblies at The City School's Summer Leadership Program. The Unity Banner and "Fears on the Floor" were among the first following the 2010 SLP retreat." 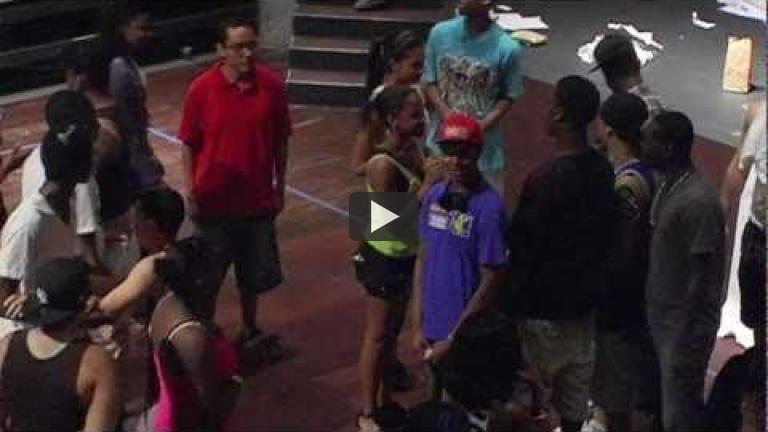 From The City School by Erika Simon (Lewis Hine Fellow 2009-2010). "In addition to racism, sexism, and heterosexism workshops, Summer Leadership Program participants learn about classism at the opening retreat." 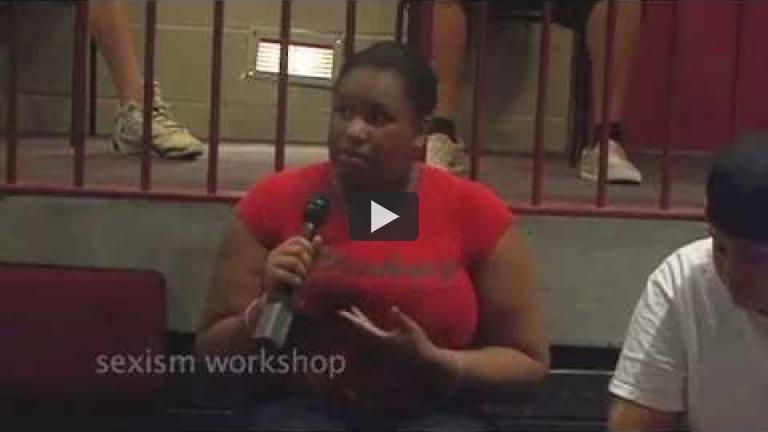 From The City School by Erika Simon (Lewis Hine Fellow 2009-2010). "The City School's Summer Leadership Program begins with a 3-day sleepover retreat. After registration, students introduce themselves and hold racism and sexism workshops before taking their suitcases to the dorms." 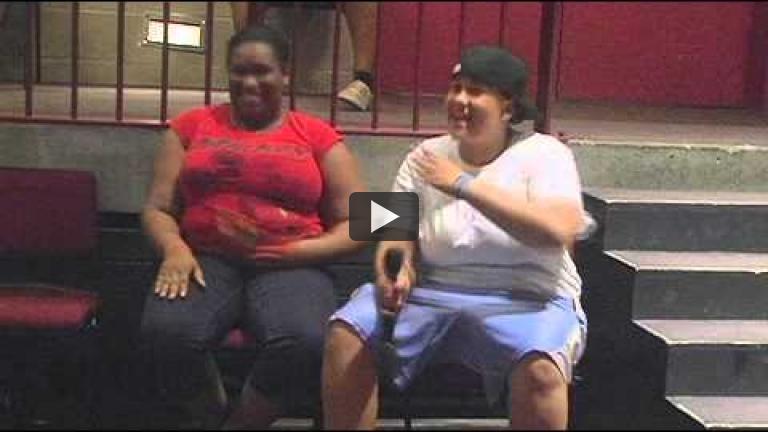 From The City School by Erika Simon (Lewis Hine Fellow 2009-2010). "The mission of The City School is to develop and strengthen the power of youth to work toward building a just society. We do this through creative education and critical thinking, leadership development, action and service, and promoting understanding and relationships across difference."

Assemblies: Unity Banner and "Fears on the Floor"
Body:

"Student staff lead icebreakers during morning assemblies at The City School's Summer Leadership Program. The Unity Banner and "Fears on the Floor" were among the first following the 2010 SLP retreat."