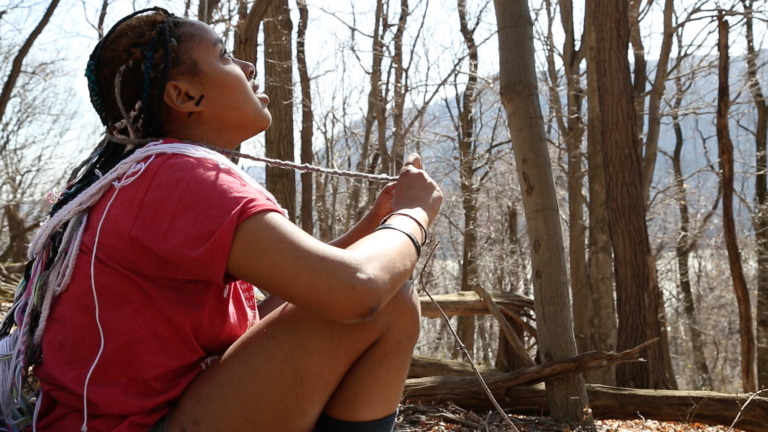 Etta was 17 then, living in a foster care home and in the midst of moving to another. Her individuality, drive to try anything new, and desire to create, instantly drew us together. She came to the art room a few times, to work on screen printing or painting, and her positive and productive energy was delightful to be around. We worked together only a few times before I had to take a 3-month family leave, and it was during one of those afternoons, when Etta and I were setting up the screen printing station, when Etta broke down. She said she wanted to apply to college and do well in school, but couldn't focus when she was moving all the time, which at that point was every few months. She quickly pulled herself back together and apologized for burdening me with her crying.

As soon as I returned to the Center, I contacted Etta to let her know I was back. She gave me a quick update of her past few months. She had dropped out of school, a few weeks prior, just after her 18th birthday, and was working towards emancipating herself from the foster care system. At her core, Etta was still the young woman I'd met months earlier - full of life, embracing everyone around her, tenacious in starting artistic projects and now, learning meditation. She had decided that Life would be her school, and that she simply wanted to be free. She wanted to paint, travel the world and start a polyamorous community, where the children would have a parenting and educational model. She believed that the more adults there were in the community, the more options and choices the children would have to choose who to learn from as they figured out how to build their moral compass, how to engage with learning, how to care for the earth and people around them.

We decided we would collaborate on a film project about this transition occurring in her life - trying to find freedom from status quo systems (i.e. foster care, school, nuclear families), and staying true through action to the person she wanted to be - an ever-flowing provider of light and positivity, who traveled the world to pass on her light, and who was both a teacher and student in the school of Life. We decided I would do some filming of her, and she would do some filming of her life.

We met a number of times the first couple of months of our project. At that point, Etta was in a new foster home, but was essentially living nomadically, spending nights at different friend's houses and long days on her skateboard, rolling around the city and befriending strangers. Her warmth and genuine care for people and their stories created immediate, close ties with nearly everyone she spent initial time with. Most of her film footage when she was on her own documented these encounters-her family she created in the street.

When we filmed together, we began in natural settings outside her day-to-day life - the woods, the beach, the mountains. We were getting to know each other, and were both fond of traveling and being out in nature. I remember our first hike, an hour north of NYC. Etta had her usual tote bag with her skateboard, blocks of wood for painting, her paints and brushes, a few self-improvement books and her yoga mat, to name the heavier items. It was her first time hiking, and she asked me in earnest if I thought she should also bring her electric guitar.

We hiked, Etta fell in love with trees, insisted we take the less traveled (or non-existent) paths on the way back down. I thoroughly enjoyed Etta's revelations during our hike and her sense of adventure as I struggled to figure out how to operate a new camera.

When we filmed in nature, Etta's universe expanded, and she talked about her dreams and goals out loud.

As the two of us filmed outside of the city, Etta continued to film her own adventures inside of the city. She'd found a group of friends in Union Square who passed out free hugs and food and preached free, unconditional love. She'd found her tribe.

As spring came into bloom, her friend's acquired a farm house and land up in the Catskill mountains. This opportunity called out to Etta in so many ways: a home for starters, surrounded by nature, away from the city struggles and hustle, and the perfect grounds to begin to build this polyamorous community she had been envisioning.

The following is a trailer for this ongoing collaborative film, made from footage that both Etta and I filmed. It is a glimpse - in fragments - of Etta's 18th year: